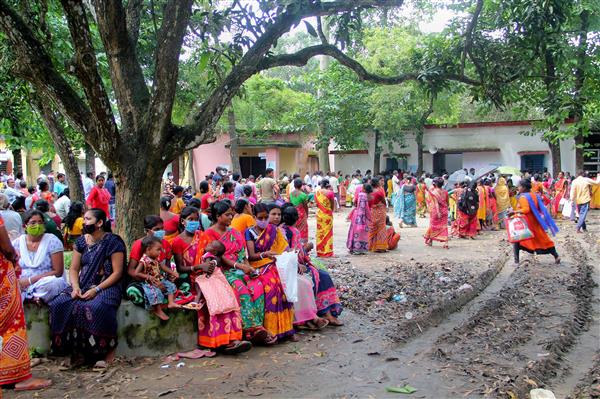 The daily Covid-19 vaccinations crossed the one crore mark on Tuesday for the second time in five days, taking the cumulative doses administered in the country to over 65 crore, the Union Health Ministry said.

Mandaviya lauded the entire country for the achievement of more than one crore doses being administered for the second day within a span of five days.

He also praised the hard work of Covid warriors and the diligence of citizens in helping achieve the momentous feat of more than 50 crore cumulative administrations of the first dose of the vaccine.

“I applaud the hard work of Covid warriors and diligence of citizens in helping achieve this momentous feat,” Mandaviya tweeted.

The daily vaccination tally is expected to increase with the compilation of the final reports for the day by late night.

Cumulatively, 25,32,89,059  individuals in the age group of 18-44 years across states and UTs have received their first dose and  2,85,62,650 have received their second dose since the start of phase-3 of the vaccination drive, according to the health ministry which cited a provisional report till 7 PM.

According to an official source, on an average 74.09 lakh vaccine doses have been administered daily in India in the last one week.

“No other country has been vaccinating its people at such a fast pace as India.

“India is at pole position in the number of vaccine doses administered daily followed by Brazil which is administering on an average 17.04 lakh doses each day,” the source said.

India administered 17 crore vaccine shots in the shortest period of 114 days which is a world record.

The US took 115 days and China took 119 days to administer the same number of doses, official sources said.

On August 27, India administered over one crore vaccine doses in a day, a feat which no other country has been able to emulate yet, the source said, adding it is like vaccinating the entire population of New Zealand twice.

India then went ahead and broke its own record within five days  by administering 1.09 crore doses till 6 PM.

All eligible beneficiaries of Himachal Pradesh have received at least one dose of Covid-19 vaccines.

There are at least eight states and UTs where 75 per cent of the people have received at least one dose of the vaccine, sources said.

The countrywide vaccination drive was rolled out on January 16 with healthcare workers (HCWs) getting inoculated in the first phase. The vaccination of frontline workers (FLWs) started from February 2.

The next phase of Covid-19 vaccination commenced from March 1 for people over 60 years of age and those aged 45 and above with specified co-morbid conditions.

The country launched vaccination for all people aged more than 45 years from April 1.

The government then decided to expand its vaccination drive by allowing everyone above 18 to be vaccinated from May 1. PTI