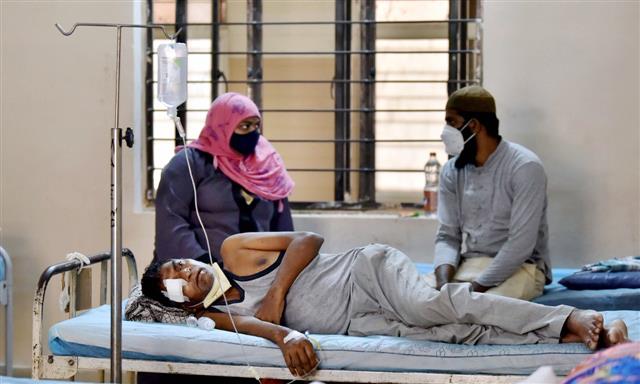 It stated that the treatment of Covid-19 patients involves the intake of drugs like dexamethasone, which suppresses our immune system response. — PTI

India has so far reported approximately cases of 8,848 mucormycosis or black fungus, one of the rapidly spreading infections observed in those recovering from Covid-19.

Taking note of the increasing numbers, the Central government has emphasised upon expediting the allocation of vials of Amphotericin-B, a key drug to treat raging mucormycosis.

In this direction, the Union minister of chemicals and fertilisers DV Sadananda Gowda has announced an allocation of 23,680 additional vials of Amphotericin-B.

The minister also informed that the allocation has been made based on total number of patients, which is approximately 8,848 across the country.

Chandigarh: Black fungus cases on the rise, PGI getting 10 to 15 cases daily

Mucormycosis is a serious but rare fungal infection caused by a group of molds called mucormycetes that has been developing in Covid-19 patients. The fungal disease is commonly being observed in patients who were given steroids for a long time, who have been hospitalised for a long time, were on oxygen support or ventilator, faced poor hospital hygiene or those who have been taking medication for other illnesses such as diabetes.

If not treated on time, the black fungus infection can turn fatal. The Covid medications can leave the body weak and low on immunity. They can also escalate the blood sugar levels in both diabetics and non-diabetic Covid-19 patients.