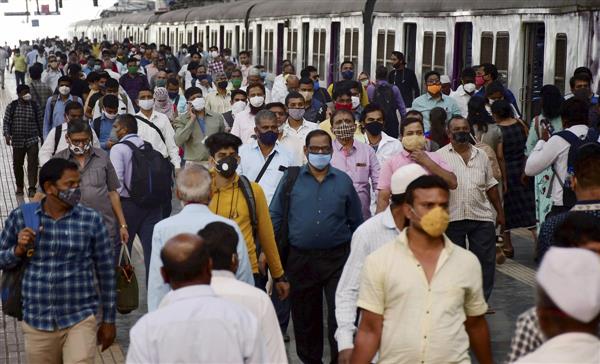 Commuters walk on a railway platform at CSMT as local train services resumed operations for general public after a gap of nearly ten months due to the coronavirus pandemic, in Mumbai. PTI Photo

The country is showing a declining trend of COVID-19 cases since the past four months and compared to similarly placed nations, the cases and deaths per million population in India is among the lowest, the government told Rajya Sabha on Tuesday.

Minister of State for Health Ashwini Choubey was responding to a question on the reasons for exponential multiplication of coronavirus cases in the country and whether there was a wrong approach at the initial stage by the government in focusing on testing, contact tracing, isolation and quarantine management.

“The country is showing a declining trend of COVID 19 cases since the past four months. Recovery rate and case fatality rate for the country is 96.94 per cent and 1.44 per cent respectively. Compared to similarly placed countries, the cases and deaths per million population in India is among the lowest (7,778 cases and 112 deaths per million population),” he said in a written reply.

The government’s strategy of focusing on testing, contact tracing, isolation and quarantine-containment was the fundamental approach for managing infectious disease outbreaks of epidemic or pandemic in nature, Choubey said, adding that the strategy had been recommended globally and by the World Health Organisation for suppressing transmission or breaking the cycle of transmission of COVID-19.

Such a strategy combined with non-pharmaceutical interventions such as physical distancing, hand hygiene, respiratory etiquettes and use of mask or face covers, closure of schools and work places, complemented the containment strategy in preventing the disease from spreading, Choubey said.

To another question on whether geo-tagging was done for areas with high COVID-19 cases, Choubey said all states and Union Territories followed mapping of cases and clusters digitally to demarcate containment and buffer zones.

In addition, the Aarogya Setu ITIHAS interface, which uses location data, and the Aarogya Setu analytics to predict emerging hotspots were used effectively to support surveillance and case finding, he said.

Meanwhile, Minister of State for Health Ashwini Choubey also said multiple factors may have contributed to India reporting higher COVID-related deaths per million population than other South Asian countries such as Bangladesh, Sri Lanka and Pakistan, the government said on Tuesday.

According to the minister, comparison of deaths per million may not be apt as there are factors such as varied geography, case definitions, surveillance, testing and reporting protocols.

To a question on whether it is a fact that COVID-19 related deaths per million population in India is much higher than that in other South Asian countries such as Bangladesh, Sri Lanka and Pakistan, he said in Rajya Sabha, “Yes. Comparison of deaths per million may not be apt as there are multiple factors that may contribute to this observation.”