India-US look at technologies and closer cooperation among militaries : The Tribune India 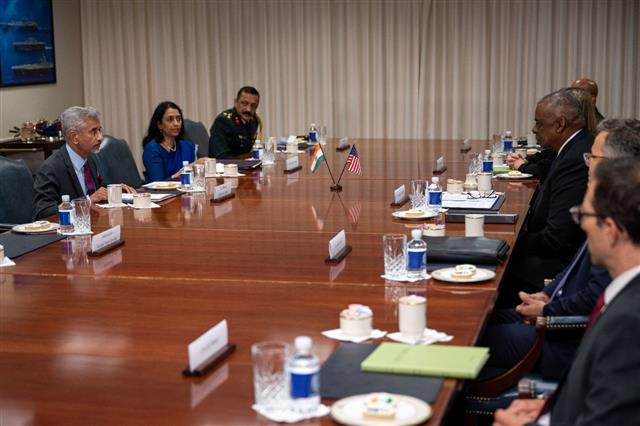 Photo: US Department of Defense

India and the US, on Monday night, committed to having a deeper defence cooperation to include sharing of emerging technologies and militaries on better information sharing and logistics.

Indian External Affairs Minister S Jaishankar who is on visit to the US met US Defense Secretary Lloyd J. Austin on Monday night in Washington.

The US Department of Defense shared the details in the wee hours on Tuesday saying, “As the United States and India progress toward a more advanced stage in their partnership. Secretary Austin and Minister Jaishankar committed to expanding information-sharing and logistics cooperation to drive deeper operational coordination between the US and Indian militaries.”

The two sides discussed new opportunities for bilateral defence industrial cooperation in support of India’s contributions as a regional security provider, including the launch of a new defence dialogue later this year. United States and India have been working more closely together across space, cyber, artificial intelligence, and other technology areas.

"All this will help ensure that our militaries are ready for future challenges," Secretary Austin said.

Speaking about the Indo-Pacific, the two leaders underscored the value of the deepening collaboration between the United States, India, Australia, Japan, and European partners. In this context, the United States said it was looking forward to work with India and like-minded partners to promote security, prosperity, and transparency throughout the region, including through the Indo-Pacific Partnership for Maritime Domain Awareness.

“Secretary Austin and Minister Jaishankar reaffirmed their commitment to working together as steadfast partners to advance the United States and India’s shared vision for a free, open, and inclusive Indo-Pacific,” the Pentagon said.

Military cooperation between the two nations is at an all-time high. Indian and US service members regularly exercise together, and the two governments regularly share information and intelligence, especially in the wake of the geospatial agreement signed between the two governments in 2020. India participates in the American international military education and training program.

India also operates US platforms like the Boeing C-17 and Lockheed Martin C-130J planes, the maritime surveillance plane Boeing P8-I while the high-end US drones, the Predator, are on lease to scan threats. Three separate type of helicopters have also been sourced from the US. These include the Attack copters Apache, the heavy lift Chinook and the submarine hunting capable MH60R.