Report a clarion call for the developed countries to undertake immediate, deep emission cuts and decarbonisation of their economies: Bhupendra Yadav 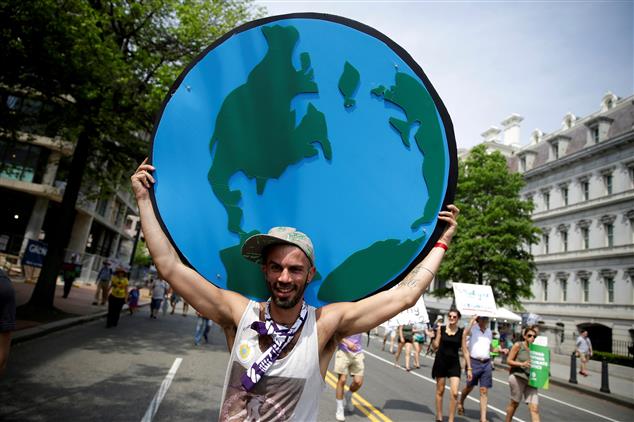 A protester carries a sign depicting the earth during the Peoples Climate March near the White House in Washington, on April 29, 2017. Reuters file

Environment Minister Bhupendra Yadav called the report, which has sounded a dire warning for the World, “a clarion call for the developed countries to undertake immediate, deep emission cuts and decarbonisation of their economies”.

“Developed Countries have usurped far more than their fair share of the global carbon budget. Reaching net zero alone is not enough, as it is the cumulative emissions up to net zero that determine the temperature that is reached.

“This has been amply borne out in the IPCC report. It vindicates India’s position that historical cumulative emissions are the source of the climate crisis that the World faces today,” he said amid reports of increasing pressure on India to commit to net zero ahead of Cop-26

India’s cumulative and per capita current emissions are significantly low and far less than its fair share of global carbon budget, Yadav added.

The report notes that the Carbon dioxide has been and will continue to be the dominant cause of global warming under all greenhouse gas emissions scenarios.

Yadav said under Prime Minister Narendra Modi India has taken numerous steps to tackle the global problem of climate change and is well on the path of decoupling its emissions from economic growth.

“India notes that the climate change is impacting the South Asian Monsoons. The report brings out that the monsoon rainfall is expected to intensify in all ranges of the projected scenarios. Intensity and frequency of heavy rainfall events are projected to be on the rise. India notes that the rising temperature will lead to increased frequency and intensity of extreme events including heat waves and heavy rainfall

Several Indian Scientists have participated in the report which says that the world is dangerously close to runaway warming for which humans are “unequivocally” to blame.