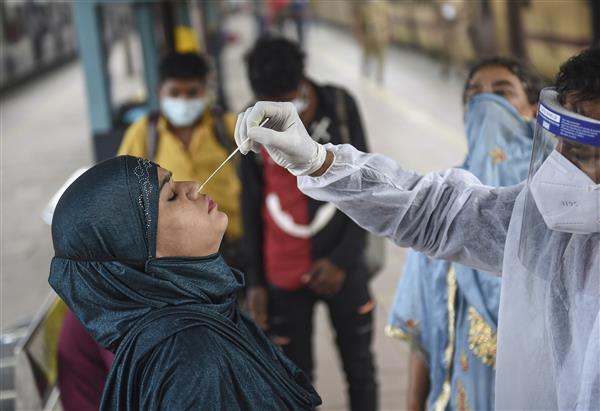 A health worker takes a swab sample of a traveller for Covid-19 testing at Dadar railway station in Mumbai. PTI

India’s cumulative Covid deaths by September 2021 were six to seven times higher than reported officially, a team of researchers from the IIM-Ahmedabad and University of Toronto have concluded in a new study published in the journal Science.

The study was based on one independent and two government data sources. The team found that Covid formed 29 per cent of deaths from June 2020 to July 2021 and of the 32 lakh deaths that were estimated during this period, as many as 27 lakh happened in April to July 2021, the time of the second wave in India.

The researchers conducted an independent telephonic survey (done by CVoter) covering 1,37,289 adults in all states and UTs from March 2020 to July 2021.

Questions asked included who died in the household and when and if the respondents thought the death was due to Covid or non-Covid. The answers were put together and analyzed.

The study authors, including Prabhat Jha of the University of Toronto and Yashwant Deshmukh of CVoter, said, “Using an independent nationally representative survey of 0.14 million (1.4 lakh) adults, we compared COVID mortality during the 2020 and 2021 viral waves to expected all-cause mortality.

COVID constituted 29 per cent of deaths from June 2020-July 2021, corresponding to 3.2M deaths, of which 2.7M occurred in April-July 2021 (when COVID doubled all-cause mortality). A sub-survey of 57,000 adults showed similar increases in mortality with COVID and non-COVID deaths peaking similarly.

Two government data sources found that, when compared to pre-pandemic periods, all-cause mortality was 27 per cent higher in 2 lakh health facilities and 26 pc higher in civil registration deaths in ten states; both increases occurred mostly in 2021. The analyses find that India’s cumulative COVID deaths by September 2021 were 6-7 times higher than reported officially.”

As of January 1, 2022, India reported over 35 million cases of SARS-CoV-2, second only to the United States. India’s official cumulative COVID death count of 0.48 million implies a COVID death rate of approximately 345/million population, about one-seventh of the US death rate.

India’s reported COVID death totals are widely believed to be under-reports because of incomplete certification of COVID deaths and misattribution to chronic diseases and because most deaths occur in rural areas, often without medical attention.

Of India’s 10 million deaths estimated by the United Nations Population Division (UNPD) in 2020, over three million were not registered and over eight million did not undergo medical certification.