Interested in diplomacy but not in negotiating with the US: Iran’s foreign minister 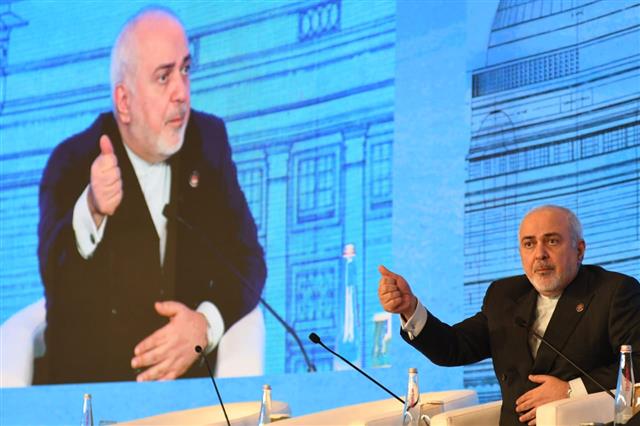 Iran’s Foreign Minister Javad Zarif on Wednesday said his country was interested in diplomacy but not in negotiating with the US, remarks that come amidst spiraling tensions between the two countries over the killing of Iranian general Qasem Soleimani.

Hitting out at the US, Zarif said Soleimani’s killing showed ignorance and arrogance.

Addressing the gathering at the Raisina Dialogue, he said 430 Indian cities saw protests against Soleimani’s killing.

“Iran is interested in diplomacy. We are not interested in negotiating with the US. US did not keep its commitments under the nuclear deal. We had a US deal and US broke it. If we have a Trump deal, how long will it last?” Zarif said.

“We need to create hope in the region. We have to get rid of despair,” he said.

Iran incurred hundreds of billions of dollars in damages because of current tensions, Zarif said.

He said Soleimani was the single biggest threat to ISIS and his killing was now being celebrated by the terror group and US President Donald Trump.

Referring to the Ukrainian jetliner that crashed earlier this week killing all 176 aboard, Zarif said shooting down of the civilian plane was a mistake.

Iran’s Revolutionary Guard has acknowledged that it accidentally shot down the Ukrainian aircraft.

Zarif’s remarks come amidst the global focus being on Iran and the US over the confrontation between them following Soleimani’s killing.

Maj Gen Soleimani, the head of Iran’s elite al-Quds force, was killed when a US drone fired missiles on his convoy in Iraq on January 3.

Last week, Iran launched over a dozen ballistic missiles targeting at least two bases where US military and coalition forces are stationed in Iraq.

Soleimani’s killing has been the most dramatic escalation yet in spiraling tensions between Iran and the US. —PTI