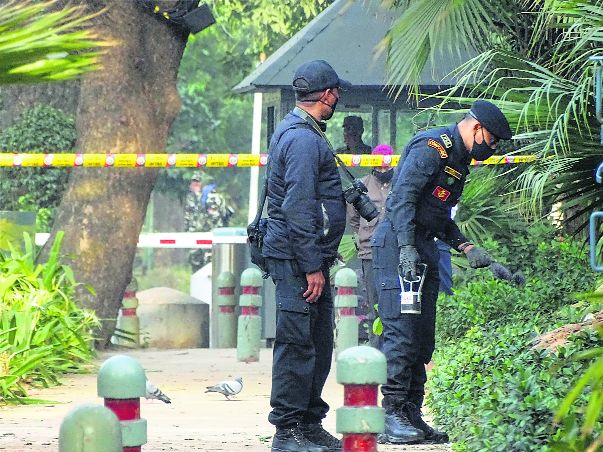 An NSG team inspects the blast site in New Delhi on Saturday. PTI

With the initial probe indicating an Iranian link to the blast near the Israeli Embassy here on Friday evening, the National Investigation Agency is most likely to take over the case from the Delhi Police, sources said.

A team of Israeli investigators is also set to join the investigation. An NIA team that visited the blast site on Friday evening carried out complete mapping of the area.

According to Delhi Police officials, initial investigations indicate that explosives and other materials used in the low-intensity improvised explosive device (IED) blast were locally sourced. The use of ammonium nitrate cannot be ruled out, they added.

The Delhi Police probe team has been in touch with the central agencies, including the IB and immigration authorities, and trying to get the details of Iranian nationals who have come to India in the past one month. Police sources have also confirmed that the note found at the blast site on Friday revealed the Iranian connection to the blast. The note claimed “it was a trailer and the target was Israeli installations in India”.

Meanwhile, security has been beefed up across the country, particularly at places with Israeli links. The footage retrieved from CCTV cameras in the area showed a cab moving near the embassy just before the explosion. Two persons had alighted from the vehicle, sources said. The cab driver has been identified and questioned about the two passengers, the Delhi Police said. The bomb disposal squad of the NSG also inspected the blast site today.