'It's a fight between nationalists, dynasts,' PM Modi addresses 3 rallies : The Tribune India

'It's a fight between nationalists, dynasts,' PM Modi addresses 3 rallies 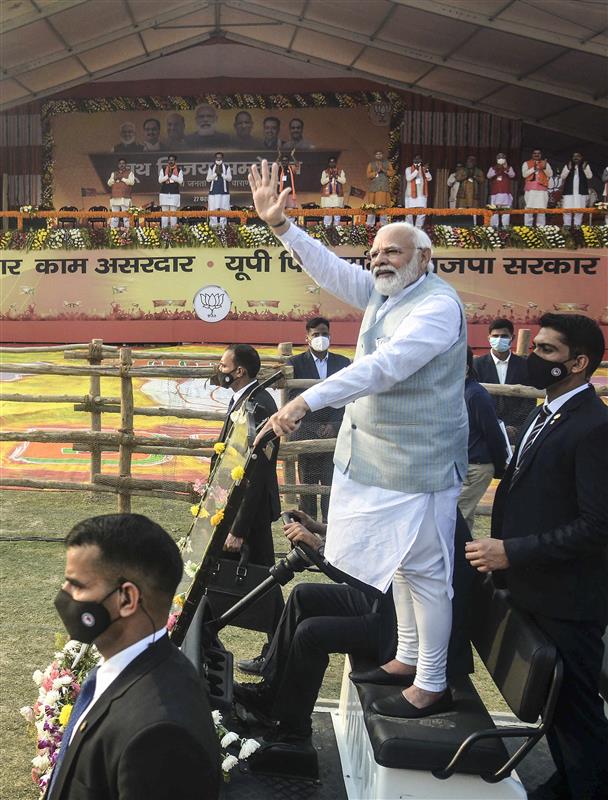 Prime Minister Narendra Modi waves at supporters as he arrives at the 'Booth Vijay Sammelan' in Varanasi on Sunday. PTI

Noting that the contest in the ongoing Assembly elections in Uttar Pradesh is between “Parivarwadis (dynasts) and Rashtravadis (nationalists)”, PM Narendra Modi, while addressing rallies in Basti, Deoria and Varanasi, today said his party and the government were working tirelessly to empower the country by empowering the armed forces and the citizens at large.

Earlier, when there was Muharram, electricity used to be supplied to UP, but on Parshuram Jayanti, Ram Navami and Krishna Janmotsav there was no supply. Amit Shah, Home Minister

Asserting that India has always given priority to the lives of its citizens in difficult times, he said, “The government is working tirelessly to bring back all Indians stuck in Ukraine.”

“Dynasts who support terrorism cannot strength the country,” he said, adding that “in these tough times it is essential to make the country strong”.

In Basti, PM Modi alleged, “The previous governments led by dynasts kept India dependent on foreign countries for its defence needs but now the priority is self-reliance.”

In Varanasi, he said: “When in Kashi prayers for my death were done, I felt elated. This meant that till my death neither I will leave Kashi nor its people will leave me.”

Ballia (UP): In the backdrop of Russia’s invasion of Ukraine, Defence Minister Rajnath Singh on Sunday said India favoured world peace. “PM Modi’s role is being appreciated on the matter. India is peace-lover. India has never attacked any country and never grabbed land of other country. He said soon the country would become self-reliant in the defence sector and become an exporter of defence equipment. PTI