J-K to get status of a state at appropriate time, Amit Shah says in Lok Sabha

The Home Minister says 6,000 displaced Kashmiri Pandits will be resettled in the Valley by 2022 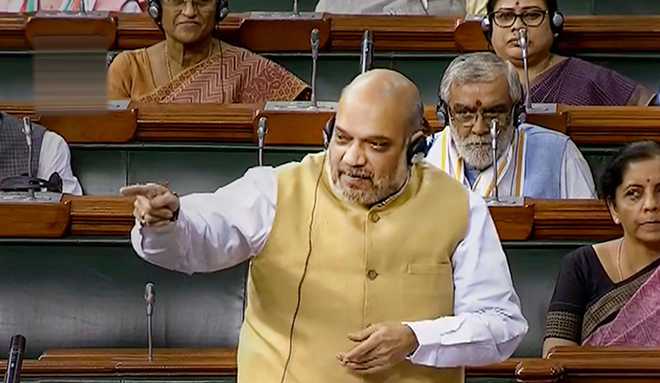 The government on Saturday said the statehood of Jammu and Kashmir would be restored at an appropriate time and informed Parliament that 6,000 internally displaced Kashmiri Pandits would be rehabilitated in the Valley by 2022.

Replying to a debate on the Jammu and Kashmir Reorganisation Amendment Bill 2021 that allows officers of JK cadre to be merged with the AGMUT cadre, Home Minister Amit Shah said in Lok Sabha that the Bill had no association with the issue of JK’s statehood and statehood would be granted once the development of the UT was on track.

The Bill was passed by a voice vote after the House rejected a statutory resolution Congress leader Adhir Ranjan Chowdhury moved seeking withdrawal of the related ordinance, was rejected.

Adhir also questioned the decline in Jammu and Kashmir’s economy after the August 2019 decision to abrogate Article 370 and questioned the Centre about the resettlement of Kashmiri Hindus.

Home Minister Shah defended the abrogation of Article 370 saying the move had enabled the extension of 170 crucial central laws, including the anti-dowry legislation and the constitutional provisions of reservation to the UT of Jammu and Kashmir, besides fastening the pace of development works there.

The home minister rejected NC member Hasnain Masoodi’s assertions that the Centre should stay the abrogation provisions since the apex court was seized of the petitions challenging the same.

“The issue of constitutionality of Article 370 abrogation is pending in the Supreme Court . Had our move been so unconstitutional the SC could have stayed it. It is under consideration and not under stay. Nowhere does the legal status say it can’t be implemented and we should stop developmental works as some members have suggested,” said Shah adding that the government would defend its position when the time comes as one country could not have two flags and two constitutions.

On Congress MP Manish Tewari’s suggestion that the government should move the SC with a plea for early hearing in the issue, Shah said the matter was too sensitive and elaborate for the courts to hear it virtually which was why the hearing had been delayed.

“We are before the SC with a position that Article 370 should not have been there. The Congress is not even before the SC. It has no position — neither yes nor no,” said Shah.

Quoting BR Ambedkar, the home minister said the abrogation of Article 370 had enabled the conduct of free and fair panchayat and district development council elections in JK and 22 subjects had been chosen to be handled at the level of panchayats and district councils including sand mining. This decentralisation, Shah said, would aid local development.

“BR Ambedkar used to say real democracy would come the day kings are born from the ballot of voters and not from the wombs of queens. That’s what is happening in JK now,” said Shah adding that officers had been instructed to stay in villages, flag development gaps and plug them.

He slammed AIMIM chief Asadudin Owaisi for mentioning the issue of “administrative postings in JK along religious lines” and asked, “Can’t a Hindu officer serve a Muslim and vice versa? Will we now divide officers on religion and call ourselves secular?”

He termed Masoodi’s “80 per cent officers in Kashmir districts are outsiders” remark as “a comment made for cheap popularity” and said, “that’s the level of direct recruitment everywhere in India”.

The minister also questioned Masoodi for referring to AGMUT cadre officers as outsiders to JK asking, “why should we treat Kashmir differently from states like Goa, is Kashmir not a part of India?”

The Home Minister gave an account of development works done by Jammu and Kashmir administration in the 17 months post the abrogation of Article 370 and said: “Three families that ruled JK for 70 years never gave an account of their work. But they are asking us to give an account of 17 months. Let them look within and see if they have the locus to ask this question,” said Shah.

Attacking the opposition for questioning the human rights record of BJP government in JK and accusing the Centre or restoring 4G under foreign pressure, Shah said, “Our government doesn’t work under pressure. Also this narrative of human rights violations is relevant to the 70-year rule of three families who had no care for the human rights of West Pakistan refugees, Valmikis, Kashmiri Pandits. Why? Because these people were not their vote banks,” Shah said accusing the opposition of weighing the issue of human rights from the prism of vote bank politics.

He also informed the house that the JK administration after scrapping the “Roshni Act which bred corruption” had created a land bank of over 29,000 kanal which would be utilised to facilitate investment in JK under a new industrial policy.