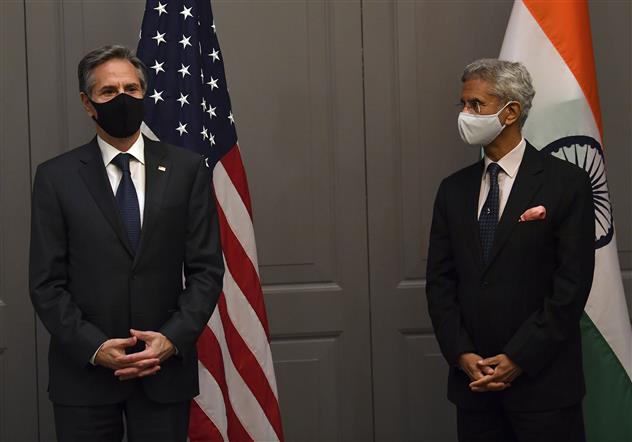 Hours after an in-person meeting with US Secretary of State Antony Blinken and UK Home Secretary Priti Patel in London, External Affairs Minister (EAM) S Jaishankar confirmed a UK media report that two members of his delegation have isolated themselves. The Ministers and the delegation members were tested in India on Sunday and found COVID negative said sources who could not confirm whether they were tested on landing in London.

Meanwhile, the Tanzanian defence attaché here has died of COVID while the MEA has not confirmed reports of the death of another diplomat from the Slovakian embassy. India’s Vaccine Maitri is also on shaky legs as sources said there are no immediate plans to fulfill commitments to countries like Bhutan, which have banked entirely on vaccines from India.

“There is concern the EAM might have been exposed to the virus. We will go by the British health authorities’ tracking and testing system. We are concerned about our delegation. We are happy that none is unwell. I would not like to confirm the Sky News story,” sources said.

Soon after the UK media outlet The Sun broke the story about two members of the Indian delegation invited to attend a G-7 conclave of foreign ministers, Jaishankar conceded that he was made aware on Tuesday evening of exposure to possible Covid positive cases.

Sources here said the four members of the delegation have isolated themselves and are hale and hearty.

“It is not a straight-forward case. We are trying to work out with UK health authorities about the level of exposure,” said the sources.

“The travel plans of the delegation back to India will depend on exactly what the UK health authorities will say. The External Affairs Minister is well,” they added.

Jaishankar has cancelled all in-person meetings and decided to continue the rest of his engagements through the virtual mode.

The UK media has now started raising doubts about the genuineness of the Indian delegation's covid negative certificates even as further tests have been sought.

“As a measure of abundant caution and also out of consideration for others, I decided to conduct my engagements in the virtual mode. That will be the case with the G7 Meeting today as well,’’ Jaishankar posted on social media.

It wasn’t clear whether his trilateral with the Australian and Foreign Ministers was held in the virtual or in-person mode.

Jaishankar had arrived in London on Monday for a four-day visit at the invitation of UK Foreign Secretary Dominic Raab to join the G7 Foreign and Development Ministers Meeting as one of the guest ministers.