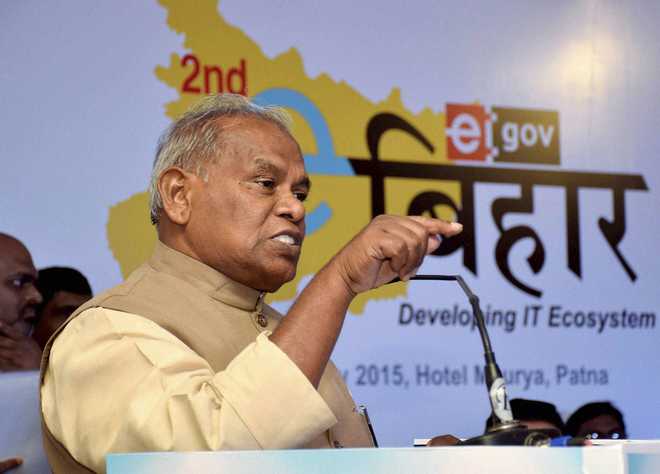 Bihar chief minister and Janata Dal-United (JD-U) leader Kumar submitted his resignation to governor Phagu Chauhan. After resigning, Kumar said MPs and MLAs of the JD(U) were not in favour of continuing the party’s alliance with the BJP.

Manjhi’s HAM has four MLAs in the 243-member state assembly. JD(U) has 45 MLAs while the RJD has 79. The BJP has 77 legislators in the House.

Kumar then left for the residence of RJD patriarch Lalu Yadav’s wife Rabri Devi in Patna to hold talks with Tejashwi Yadav, who, it is speculated, could again get the deputy chief minister’s post if a new coalition government if formed.

Before this, JD(U) parliamentary board president Upendra Kushwaha shared a congratulatory message for Kumar for “assuming leadership of a new coalition in a new form”.

“March ahead Nitish ji. The country is waiting for you,” Kushwaha added in the tweet.

Rohini Yadav, Lalu Yadav’s daughter, had also posted a tweet confirming the renewal of ties of the two top veterans of Bihar’s politics. “Get ready for the coronation, those with the lantern are set to return,” Rohini Yadav tweeted along with a video amid a separate meeting of the Mahagathbandan MLAs.

Earlier, in the JD(U) meeting today, all MLAs and MPs of the party supported chief minister Kumar’s decision and said that they were with him. They also asserted that they will continue to support Kumar in his decision.

Meanwhile, Congress and Left party leaders and MLAs also converged today at the residence of Rabri Devi here for a meeting convened by the opposition RJD.

BJP leader and Union minister R K Singh, however, questioned Kumar’s move and said there was only hunger for power behind the decision. How would Kumar explain his tie-up with the RJD, which he has accused of being “corrupt”, asked Singh. ANI