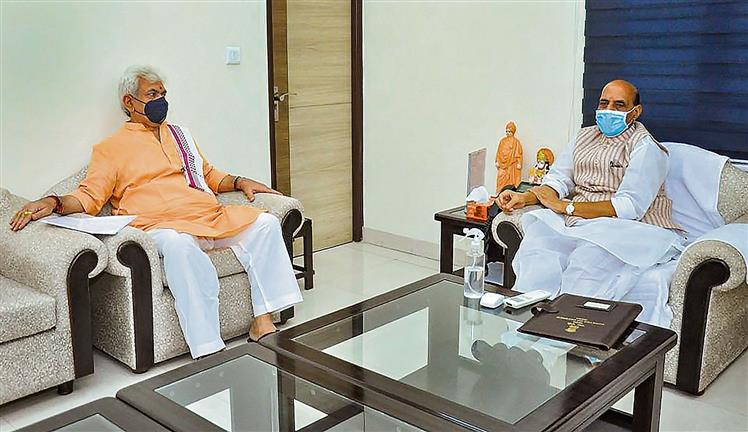 Ahead of the Prime Minister’s scheduled meeting with Jammu and Kashmir parties on June 24, activities around the event heated up on Sunday with Defence Minister Rajnath Singh and Home Minister Amit Shah meeting PM Narendra Modi and UT’s political outfits holding parleys in Srinagar to decide on the Centre’s invitation.

The National Conference and Peoples Democratic Party, largest constituents of the People’s Alliance for Gupkar Declaration (PAGD), conducted internal party deliberations today and decided to take a final call on the PM’s event after a PAGD conference on June 22. The PDP’s Political Affairs Committee met at party president Mehbooba Mufti’s residence in Srinagar and authorised her to take a call on the June 24 meeting. Asked if she had decided, Mufti told The Tribune, “I will decide only after the PAGD meet.” National Conference chief Farooq Abdullah also spoke with senior party leaders today but the talks were not “structured”, said NC provincial president Nasir Aslam Wani. He said a PAGD meeting would take the final call on participation.

In Valley, concern over seat reduction

The PAGD includes NC, PDP, Awami NC, CPM, J&K People’s Movement and the CPI. Sajjad Lone’s People’s Conference is no more with the alliance. Sources said the PAGD might decide to nominate attendees for the Prime Minister’s meeting.

Meanwhile, sources said the ongoing delimitation exercise was high on the agenda with discussions on June 24 expected to seek a broad consensus in the matter. Sources also said the Delimitation Commission was likely to meet with J&K’s deputy commissioners soon to seek inputs on making the constituencies “geographically more compact”. In an earlier letter to DCs, the commission had sought details of areas of the current constituencies and related aspects.

With the government repeatedly ruling out the restoration of J&K’s special status – a professed goal of the PAGD – political observers say the J&K mainstream parties would probably deliberate hard over the PM’s invitation.

The PAGD had at the time of its constitution even adopted the erstwhile flag of Jammu and Kashmir as its symbol. The move was a symbolic expression of PAGD’s commitment to the demand that special status of the area be restored to the pre-August 5, 2019, status.

Another issue the National Conference would have to consider while deliberating on the Centre’s invitation is the fact that it has challenged the J&K Reorganisation Act 2019 in the Supreme Court.

The Lok Sabha MPs of the National Conference had skipped the first meeting of the Delimitation Commission on February 18 this year, saying that the J&K Reorganisation Act 2019 was “unconstitutional” and under judicial scrutiny and they could not attend proceedings that flowed from the Act.

The PDP too has been publicly seeking restoration of J&K’s statehood — something the Centre has said will happen at an appropriate time. “It seems like an appropriate time in their dictionary will be when their agenda of changing the demography and reducing Kashmiris to second class citizens gets fulfilled,” Mufti had recently said in an interview to The Tribune.

Meanwhile, PDP leader Naeem Akhtar has been released from house detention after over a month, officials said.