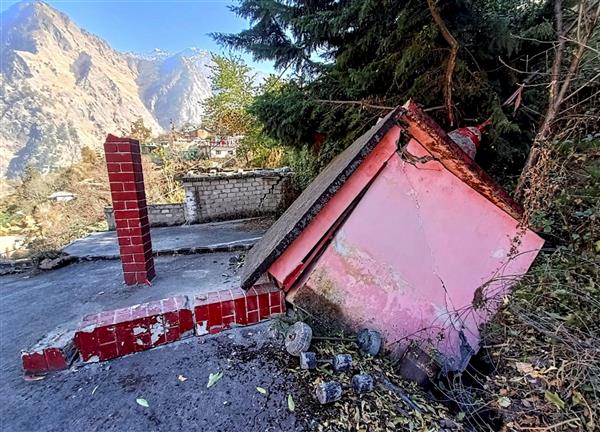 A temple collapses after the gradual sinking of Joshimath in Chamoli district of Uttarakhand, in Joshimath, on Sunday, January 8, 2023. PTI

Central government agencies and experts are assisting Uttarakhand to prepare short, medium and long term plans to deal with the Joshimath situation, officials said on Sunday after the Prime Minister’s Office held a high-level review meeting.

Affected families are being shifted to safe locations, officials said.

The Border Management secretary and members of the National Disaster Management Authority (NDMA) will visit Uttarakhand on Monday and assess the situation.

During the meeting held by P K Mishra, the principal secretary to the prime minister, the Uttarakhand chief secretary briefed the PMO, they added.

The review meeting was attended by the cabinet secretary, other senior officials of the central government and members of the National Disaster Management Authority.

District officials of Joshimath besides senior officials of Uttarakhand attended the review meeting through video-conferencing.

Uttrakhand Chief Minister Pushkar Singh Dhami visited Joshimath on Saturday to assess the situation on the ground, a day after he directed the immediate evacuation of around 600 affected families.

Dhami said Joshimath is an important place for culture, religion and tourism and all efforts will be made to save it.

Joshimath is the gateway to famous pilgrimage sites like Badrinath and Hemkund Sahib and international skiing destination Auli.