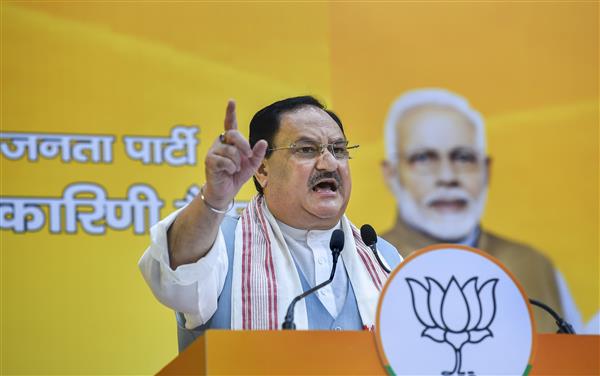 The long-awaited team of the BJP president JP Nadda was announced Saturday with many prominent names from the previous team missing and several new faces included. Party leaders said all efforts had been made to maintain a regional balance with adequate representation to all prominent States.

The most prominent changes are in the list of eight general secretaries, the crucial organisational position that serves as the link between the states and the central leadership, which now has five new faces including Punjab’s Tarun Chugh.

Chugh is a national secretary in the outgoing team and his elevation is being viewed with a lot of interest in the wake of the BJP’s recent fallout with Punjab ally Akali Dal over farm bills. It is being seen as a BJP’s effort towards projecting leadership in the State which it has so far been contesting with the Akalis as the senior partner. Notably, Punjab has another representation in the form of former IPS officer Iqbal Singh Lalpura as national spokesperson. Though Haryana does not have direct representation in the team, newly-appointed General Secretary Dushyant Kumar Gautam (Rajya Sabha MP) has a connection to the state.

Young and fiery advocate of ‘Hindutva plank’ Tejasvi Surya has made an entry as the president of the party’s youth wing in place of Poonam Mahajan.

Nadda also expanded the list of spokespersons to 23, with Rajya Sabha MP and current media head Anil Baluni being elevated as the chief spokesperson. Others on the list include former ministers Rajyavardhan Singh Rathore, Rajiv Pratap Rudy and Shahanawaz Hussain and former Congress leader from Kerala Tom Vadakkan.

Uttar Pradesh leader Rajesh Agarwal has been appointed treasurer in place of union minister Piyush Goyal while Mandsaur MP Sudhir Gupta will be his deputy. Amit Malviya has been retained as the IT cell and social media in charge.

Changes are also expected in the Parliamentary Board — the BJP’s highest decision-making body — where there are vacancies due to the passing away of senior leaders Ananth Kumar, Sushma Swaraj and Arun Jaitley and the election of veteran leader M Venkaiah Naidu to the post of the Vice-President of the country.

Prime Minister Narendra Modi greeted the new team of office-bearers and expressed confidence that they would uphold the “glorious tradition” of the party of serving the people of India selflessly and with dedication.

“Congratulations and best wishes to the new team. I am confident they will uphold the glorious tradition of our party of serving the people of India selflessly and with dedication. May they work hard to empower the poor and marginalised,” he tweeted.

Congratulations and best wishes to the new team. I am confident they will uphold the glorious tradition of our Party of serving the people of India selflessly and with dedication. May they work hard to empower the poor and marginalised. https://t.co/5beiCTkcsA

Sources said the selection reflects the party’s ideology. Some leaders also appear to have been dropped for reasons like “making comments that were not appreciated by the senior leadership and non-performance”.

“It is customary for the new president to have a new team,” they stressed, adding that the “team has a mix of new and existing to ensure the continuity”.

Though the buzz also is that some of those who have been dropped could make an entry in Prime Minister Narendra Modi’s Council of Ministers. Prime Minister Modi greeted the new team and expressed confidence that they would uphold the “glorious tradition” of the party of serving the people of India selflessly and with dedication.