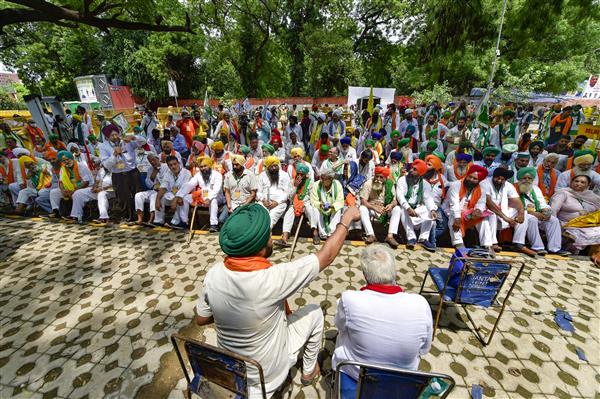 Farmers during their Kisan Sansad at Jantar Mantar in New Delhi.PTI

The second day of the ‘Kisan Sansad’ at Jantar Mantar” saw the “resignation of designated agriculture minister” following a debate around the “APMC Bypass Act”.

The Samyukt Kisan Morcha, which has organised the ‘Kisan Sansad’, rejected her statement withdrawing the remarks, calling them “simply unacceptable and unpardonable”.

“She reflected the derogatory and repressive attitude that the BJP Government has been showing towards the farmers’ movement from the beginning. This is completely unpardonable,” a statement issued by the SKM said, condemning the “attitude of the newly anointed minister towards farmers of the country.”

As many as 200 farmers associated with SKM participated in the “proceedings” that included a “question hour and the debate”.

Playing the “agriculture minister Ravneet Singh Brar, resigned after failing to answer the questions of members”, according to the statement.

The ‘Kisan Sansad’ also passed a unanimous resolution on “adverse experience of the operation of the APMC Bypass Act from June 2020 to January 2021 before the Supreme Court suspended the implementation”.

The resolution stated that “farmers need much higher number of operating mandis and not less mandis” and called for “a repeal of the central Act immediately”.

“The Samyukt Kisan Morcha notes that the Electricity Amendments Bill-2021 has been listed for Business in this session by the government. SKM warns the government,” the statement added.