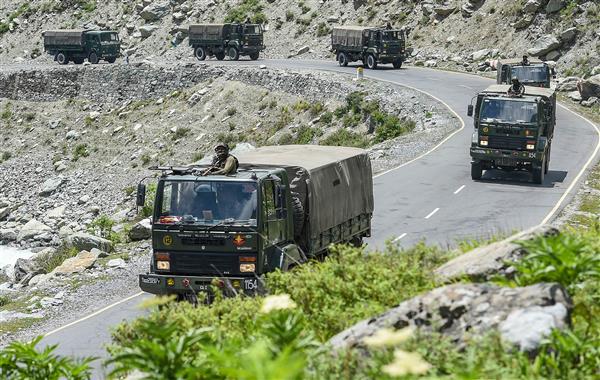 An Army convoy on the Srinagar-Leh National highway. File photo

India on Thursday said the disengagement process currently underway in the India-China border areas in eastern Ladakh is specifically aimed at addressing face-off situations and close-up deployments of troops.

This is the understanding between senior military commanders with both sides having agreed to re-deploy towards their regular posts on their respective sides of the LAC, said the Ministry of External Affairs (MEA) after a marathon 15-hour of talks on Wednesday.

The MEA also sought to dispel the impression that the “mutual re-deployment” has led to a change in the pre-April situation. “These are mutually agreed reciprocal actions to be taken by both sides. And as I have already conveyed, it is an ongoing process. This should not be misrepresented. There is absolutely no change with respect to India’s position on the LAC,” said the MEA spokesperson.

“We are fully committed to observing and respecting the LAC. Any unilateral attempts to change the status quo along the LAC are not acceptable,” he added.

India and China have been engaged in discussions through established diplomatic and military channels to address the situation along the LAC. The process was given an impetus by two hours of talks between National Security Adviser Ajit Doval and Chinese State Councillor-cum- Minister of Foreign Affairs Wang Yi on July 5.

This was followed by a meeting of the Working Mechanism for Consultation and Coordination on India-China Border Affairs (WMCC) on July 10.

Srivastava said in these meetings, the two sides have agreed on complete disengagement of the troops along the LAC for full restoration of peace and tranquillity in the border areas in accordance with bilateral agreements and protocols. It was in this context that the Indian and Chinese Senior Army Commanders held their fourth meeting at Chushul on July 14 at which they reviewed the progress of the disengagement process and also discussed further steps to complete it at the earliest.

While asking to avoid unsubstantiated and inaccurate reports on the complex process of disengagement along the LAC, the MEA said both sides remained committed to the objective of complete disengagement by continuing with their diplomatic and military engagements.