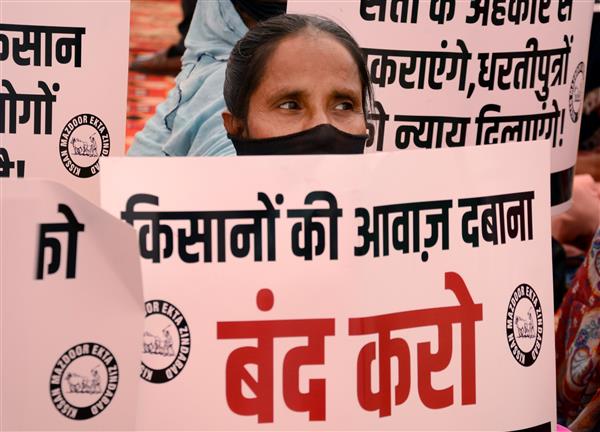 Congress leaders and workers observe a silent fast across the country demanding the arrest of all the accused in the Lakhimpur violence case and the dismissal of Union Minister of State for Home Ajay Mishra, in Amritsar, on Monday, October 11, 2021. PTI

Farmers protesting against the Centre’s three contentious farm laws will observe ‘Shaheed Kisan Diwas’ on Tuesday to pay tribute to the four farmers who lost their lives in the Lakhimpur Kheri violence recently, a statement by the Samyukt Kisan Morcha said.

The Samyukt Kisan Morcha (SKM), an umbrella body of over 40 farm unions, appealed to farmer organisations and progressive groups across the country to mark the occasion by organising prayer and homage meetings all over the country, followed by candle light vigils in the evening.

“October 12 (tomorrow) will be marked as Shaheed Kisan Diwas all over India on SKM’s call. Tomorrow, the ‘antim ardaas’ of the martyrs of Lakhimpur Kheri massacre will take place in Tikunia at Sahebjada Inter College. Preparations are being made for the same and tens of thousands of farmers are expected to join this prayer meeting,” a statement said.

The SKM urged people to light five candles outside their houses at 8 pm on Tuesday.

The organisation also expressed its dismay at no action being taken against BJP MP Ajay Mishra, whose vehicle allegedly ran over the farmers at Lakhimpur Kheri.

“It is shameful on the part of the Modi government that Ajay Mishra Teni has not been sacked yet. It was his vehicles that were in the convoy that killed innocent people,” it said.

The body added that farmers will mark Dussehra by burning effigies of BJP leaders on October 15.

Thousands of farmers from across the country have been camping at Delhi borders since November last, demanding repeal of the three farm laws that they claim would do away with the minimum support price system, leaving them at the mercy of big corporations.

Over 10 rounds of talks with the government, which has been projecting the laws as agricultural reforms, have failed to break the deadlock between the two sides. PTI