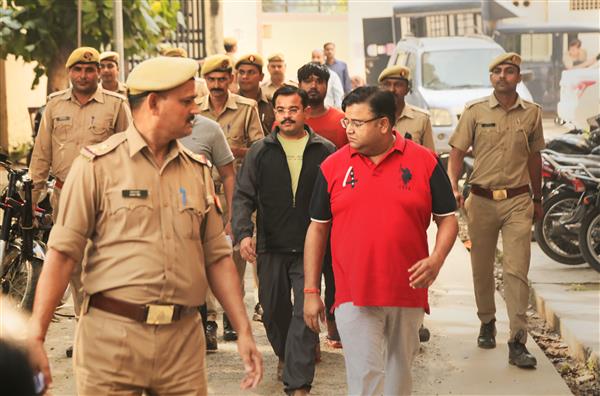 Ashish Mishra and other accused in the Lakhimpur Kheri violence case being produced in a court in Lakhimpur on October 22, 2021. PTI

Union Minister of State for Home Ajay Mishra’s son Ashish Mishra, arrested for his alleged role in the Lakhimpur Kheri violence, was on Friday remanded in police custody for two days.

It was for the second time that he was remanded in police custody by Lakhimpur Kheri’s Chief Judicial Magistrate Chinta Ram.

Besides Mishra, CJM Ram also sent three other accused in the case—Ankit Das, Shekhar Bharti and Latif —to police custody, acceding to the prosecution’s request for their police remand.

The two-day police remand for the four, starting from 5 pm on Friday, will end at the same time on Sunday.

After the expiry of his first remand period, he had been sent back to the Lakhimpur Jail under judicial custody.

“After hearing the arguments from the prosecution and defence counsel, the court remanded the four in police custody from October 22 to 24 for their custodial interrogation,” he added.

While remanding the four in police custody, the court allowed their lawyers to watch their questioning from a distance without interfering with the investigation.

The court also asked the police to get the accused medically examination at the start and the end of their remand period.

Accordingly, the police remand of all seven accused will end on October 24 evening.

In the FIR lodged at the Tikonia police station in Lakhimpur Kheri district following the October 3 violence there in which eight people, including four farmers, were killed, Ashish Mishra figures as the prime accused besides 10-15 other unidentified, unmade persons.

The violence was triggered after an SUV of BJP supporters’ convoy had allegedly ploughed into a crowd of farmers protesting against the planned visit of Union MoS (Home) Mishra along with UP Deputy Chief Minister Keshav Prasad Maurya there, leaving four people in the crowd dead.

In the ensuing violence, two BJP supporters, an SUV driver and a freelance journalist were killed.

After the registration of the first FIR, a second counter-FIR was lodged at the same police station on the complaint by BJP supporter Sumit Jaiswal, who too was arrested subsequently.

The UP government has set up an SIT, headed by DIG Upendra Kumar Agarwal, to probe into the case. A total of ten people have been arrested in the case so far. PTI