At Jammu event, some members of 'Group of 23' claimed the Congress has 'weakened' 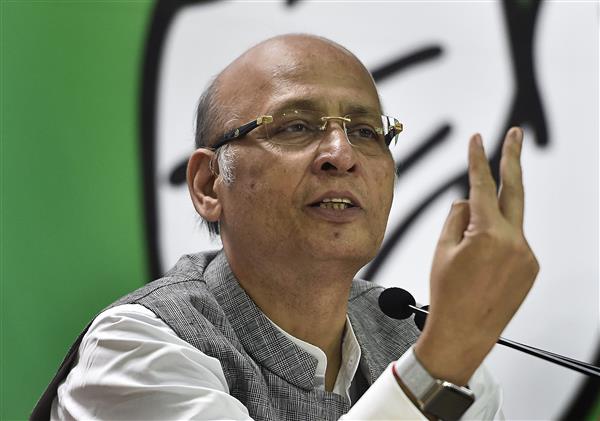 The Congress on Saturday said the leaders in the “Group of 23” are respectable partymen in whom it took pride, but advised them to make their “best contribution” and display their “loyalty” to the party by campaigning to strengthen it in the states that are going to polls.

The advice came in response to the remarks made by some members of the “Group of 23”, who got together to address a non-political rally in Jammu and said the Congress has “weakened”.

The “Group of 23”, led by senior Congress leader Ghulam Nabi Azad, had written to party chief Sonia Gandhi demanding an organisational overhaul and internal elections for all posts in the Congress.

Read also: Congress weakening, ‘G-23’ has come together to strengthen it: Dissenters at Jammu meet

“With greatest respect on behalf of the Congress party, each person who has gone to Jammu to address a rally is a senior, highly-respected and well-regarded member of our party, we are proud to have them in our party and I believe that they are equally proud to be members of the Congress. They are, therefore, part of the Congress family,” party spokesperson Abhishek Singhvi told reporters here.

He, however, said it would have been better if the said leaders, including Azad, campaigned to strengthen the Congress in the poll-bound states.

“Gently and respectfully, I say that the best contribution to the Congress’s cause would be to get active, not in any manner among ourselves, but by participating in the ongoing campaign everyday in the five states that are going to polls,” Singhvi said.

He said the “true loyalty” of the leaders to the Congress would have been displayed had they campaigned in favour of the grand old party and strengthened it in the poll-bound states, where it is fighting hard.

To a question on the remark made by one of the leaders in Jammu that Azad was “used” by the Congress, Singhvi said the veteran leader has never complained in this regard, adding that those making such remarks are probably not aware of the party’s contemporary as well as old history.

He said Azad has been a Union minister since the times of former prime minister Indira Gandhi and has represented the Congress seven times in Parliament, including five terms in the Rajya Sabha, for a long innings spanning over 40 years.

Besides, he said Azad was made the chief minister of Jammu and Kashmir by Congress president Sonia Gandhi and also the general secretary of the party for 20-25 years, exercising supervision on the Congress’s rank and file in over 20 states.

Singhvi refused to answer further questions on the issue of internal discipline as the Congress leaders have gone public with their criticism of the party for the first time.

In a public show of dissent, the “G-23” leaders, including Azad, Anand Sharma and Kapil Sibal, who have been pressing for a change of leadership and an organisational overhaul in the Congress, gathered on one stage in Jammu, saying the party is weakening and they have come together to strengthen it.

“It is an occasion to speak the truth and I will speak the truth. Why have we gathered here? The truth is we can see that the Congress is weakening. We have gathered here. We had gathered earlier also and together, we have to strengthen the Congress,” Sibal said, addressing an event dedicated to Mahatma Gandhi that was also attended by several other party leaders such as Bhupinder Singh Hooda, Manish Tewari and Raj Babbar.

The leaders, who were part of the group now called “G-23”, had triggered a storm in the party last year with their letter to the Congress chief, expressing unhappiness over its functioning and demanding a full-time party president. PTI