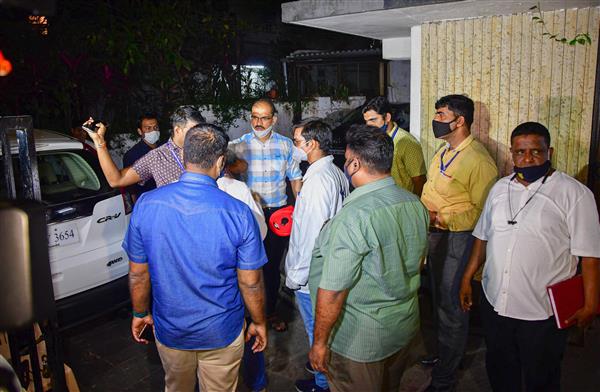 The National Investigation Agency (NIA), which is probing the case of recovery of the explosives-laden SUV and arrested Mumbai Police officer Sachin Waze, had impounded five high-end cars during its probe -- two Mercedes, one Prado, the Scorpio which was used to carry explosives, and an Innova. PTI file

The Maharashtra Anti-Terrorism Squad (ATS) has impounded a high-end car from Daman in connection with the Mansukh Hiran murder case, an official said on Tuesday.

The Volvo car with the Maharashtra registration number was impounded on Monday, the official said, adding that there is no clarity so far on who owned this car.

The car is kept at the ATS office in Thane neighbouring Mumbai, he said.

After arresting two persons on Saturday night in connection with the murder case, the ATS detained a person from Gujarat who had allegedly provided them SIM cards, officials had said, adding that they recovered many SIM cards from the person.

The SUV with explosives found near industrialist Mukesh Ambani's house in Mumbai on February 25 had been allegedly stolen from possession of Hiran, the Thane-based businessman whose body was found in a creek in Mumbra on March 5.

The National Investigation Agency (NIA), which is probing the case of recovery of the explosives-laden SUV and arrested Mumbai Police officer Sachin Waze, had impounded five high-end cars during its probe -- two Mercedes, one Prado, the Scorpio which was used to carry explosives, and an Innova.

The ATS had said that Waze was also a prime accused in the Hiran murder case.

The NIA suspects that at least three of the impounded five cars were used by Waze, who was posted as Assistant Police Inspector (API) with the Crime Intelligence Unit when arrested on March 13. He was later suspended from service.

On Monday morning, the ATS team took accused Shinde to the residence of Waze in Thane and later to the creek in Mumbra where Hiran's body was found.

Though the Hiran murder case was transferred to the NIA on March 20, the ATS is still conducting investigation.

The ATS had lodged a murder case under Section 302 (punishment for murder), 201 (causing disappearance of evidence of offence or giving false information to screen offender) 120B (criminal conspiracy) and 34 (common intention) of the Indian Penal Code against unidentified persons and on Saturday his murder case was handed over to NIA for further probe, the official added. PTI