BJP has accused Rathod of having links with woman after his purported photographs, clips with her went viral on social media 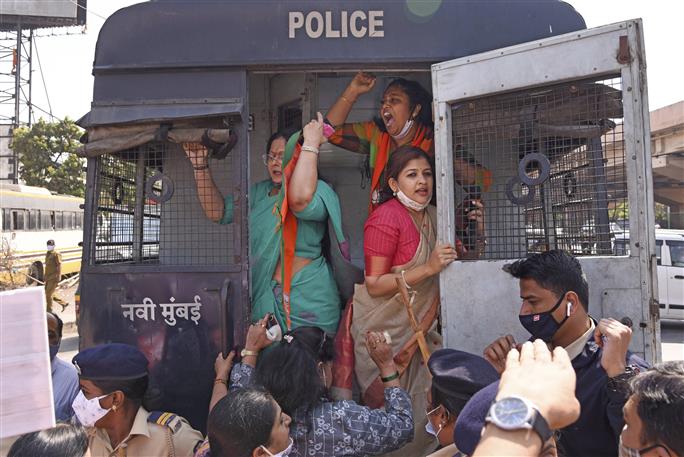 Police personnel detain BJP Mahila Morcha members at Sion-Panvel Highway, during a protest against Shiv Sena Minister Sanjay Rathod over his alleged involvement in a suicide case, in Navi Mumbai, on February 27, 2021. PTI

Maharashtra minister Sanjay Rathod, facing flak from the opposition BJP after being linked to a woman’s death, on Sunday resigned from the state cabinet.

Rathod made the announcement after submitting his resignation to Chief Minister Uddhav Thackeray, who is also the president of his Shiv Sena party.

“There has been a lot of dirty politics over the issue of the woman’s death,” Rathod told reporters, adding he has quit the ministry so that the truth can come out.

Rathod, who holds the forest portfolio, was facing allegations of complicity in the death of Puja Chavan (23), a resident of Beed district, who was found dead in Pune on February 8, apparently after falling off from the building in which she lived.

Talking to reporters after meeting the chief minister at his official residence ‘Varsha’, Rathod said he had resigned to facilitate a free and fair probe.

“Attempts were made to tarnish my image and destroy my reputation I had built after 30 years of social work. I was saying that let the probe happen before taking any decision.

But the opposition threatened to disrupt the budget session,” Rathod said.

Leader of Opposition in the Assembly Devendra Fadnavis said the resignation of the minister wasn’t enough and demanded that an FIR should be filed against him.

The BJP has accused Rathod of having links with the woman after his purported photographs, audio and video clips with her went viral on social media. PTI