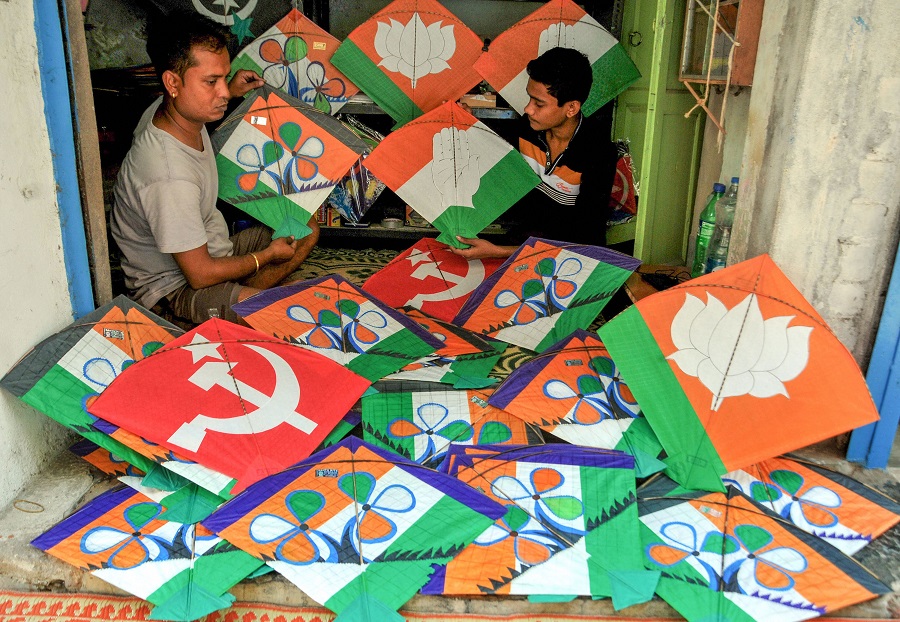 A vendor shows kites printed with symbols of various political parties ahead of the West Bengal Assembly polls, in Kolkata on Friday. PTI

Launching a strident attack against the West Bengal Chief Minister who on Friday announced her decision to contest from Nandigram, the BJP claimed Mamata Banerjee got “scared of losing” which is why she “dumped” Bhowanipore, her traditional seat, in favour of Nandigram.

While Mamata announced TMC candidates for the upcoming elections, the BJP, which held its central election committee meeting on Thursday, is yet to disclose its list. Sources are indicating some change in strategy, perhaps also a re-think over some seats in the key state that is a prestige issue for both the BJP and the TMC.

Even as party leaders insisted that the BJP’s Bengal list for upcoming Assembly elections was “ready and will be announced soon",  Home Minister Amit Shah and party president JP Nadda apparently have asked the state leaders to recommend “more names”.

While the BJP attacked Mamata for shifting to Nandigram, it is yet to officially announce Suvendu Adhikari’s candidature against her. Sources said: "The top leadership will take the final call after taking into consideration all factors, including the TMC candidates."

Soon after Mamata announced her candidature from Nandigram, BJP IT cell chief Amit Malviya said: “If the incumbent Chief Minister is unsure of winning her traditional seat, it is because she has sensed strong anti-incumbency on ground. This is just the beginning. Pishi will soon see Maa, Maati and Manush all slipping out of her hands. Bengal will finally see ashol poriborton”.

Earlier, the BJP had said if Mamata was confident she should just contest from one seat, in this case Nandigram from where Adhikari, her former confidant and now BJP leader, was expected to be the saffron candidate.

Malviya, who also questioned how Mamata knew the BJP was fielding Adhikari from Nandigram, claimed she left Bhowanipore because she was “scared” and that she was keeping “open” the option of Tollygunge.

“A nervous Mamata Banerjee not only deserts her traditional seat of Bhowanipore but also keeps the option of contesting Tollygunge open. In the press she slips in, ‘I may contest too’ while announcing Arup Biswas’s name for the seat! Pishi is sensing defeat,” Malviya said.

BJP leaders also claimed that Mamata took the decision to shift out of Bhowanipore because of the “large number of Hindus” there.

“She knows she would have lost in Bhowanipore,” they said.

Meanwhile,  sources also said the leadership was considering fielding Union Minister Babul Supriyo from Bhowanipore if Mamata had decided to contest from there.