Hiren Mansukh’s Scorpio with gelatin sticks inside was found near ‘Antilia’, Ambani’s multi-storey residence in South Mumbai, on February 25 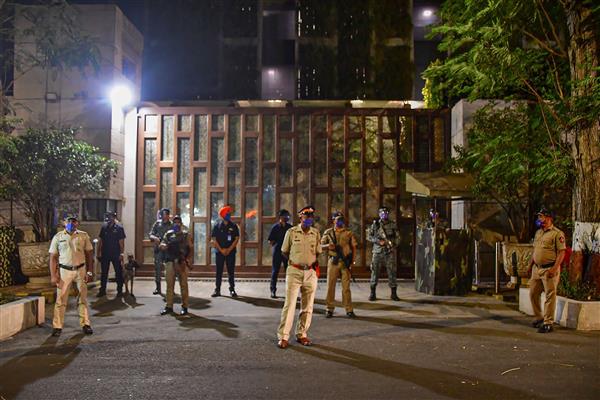 Police personnel guard outside industrialist Mukesh Ambani's residence Antilla after explosives were found in an abandoned car in its vicinity, in Mumbai. — PTI

Hiren Mansukh, owner of the vehicle with explosives which had been found parked near industrialist Mukesh Ambani’s residence last week, was found dead in a creek in neighboring Thane on Friday, police said.

In another twist in the case, Maharashtra Home Minister Anil Deshmukh said the deceased was not the real owner of the vehicle.

The probe of the case has been handed over from Mumbai Crime Branch to the state Anti-Terrorism Squad (ATS) now, he announced.

Mansukh, around 45-year-old, went missing on Thursday night as per his family. The body was found on the banks of the creek along the Mumbra Reti Bunder road in the morning, a senior official of Thane Police said.

Mansukh’s Scorpio with 20 gelatin sticks inside was found near ‘Antilia’, Ambani’s multi-storey residence in South Mumbai, on February 25. Police had said it had been stolen from Airoli-Mulund Bridge on February 18.

Crime Branch of Mumbai police had recorded Mansukh’s statement in the case. Mansukh, who was in vehicle spare parts business, had said he had lodged a police complaint after the SUV was stolen.

On Friday his family members approached Naupada Police Station in Thane saying he had gone missing.

An accidental death report has been registered and probe is on, the Thane police official said.

Speaking to reporters in Mumbai, Leader of Opposition in the Maharashtra Legislative Assembly Devendra Fadnavis said the death of a prime witness showed that something was fishy. “I reiterate the demand that the case be handed over to the NIA,” the BJP leader said.

Earlier, Fadnavis raised the issue in the state Assembly, seeking probe by the National Investigation Agency.

Home Minister Deshmukh said Mansukh’s body bore no injury marks. Autopsy report was awaited, and Maharashtra Police were perfectly capable of investigating the case, he said, adding that the state ATS will now probe it.

The home minister also said that the original owner of the SUV had handed it over to Mansukh for some interior work.

Fadnavis said Deshmukh had not been briefed properly about the case, as Mansukh had told the police that he was the owner.

Parliamentary Affairs Minister Anil Parab said it is not necessary that the person told the truth. “Let the police probe the matter. Give them some time and have faith in them,” Parab said, adding that the NIA was already conducting a parallel probe.

Speaking to reporters later, Deshmukh reiterated that Mansukh was not the vehicle’s owner but he was in its possession for some time.

A Mumbai crime branch official, meanwhile, said that Mansukh had complained to the police that some local police officials and journalists were harassing him for the last few days.

He had written letters to police commissioners of Thane and Mumbai where he also mentioned that he was disturbed and under stress due to this harassment, the official claimed. PTI