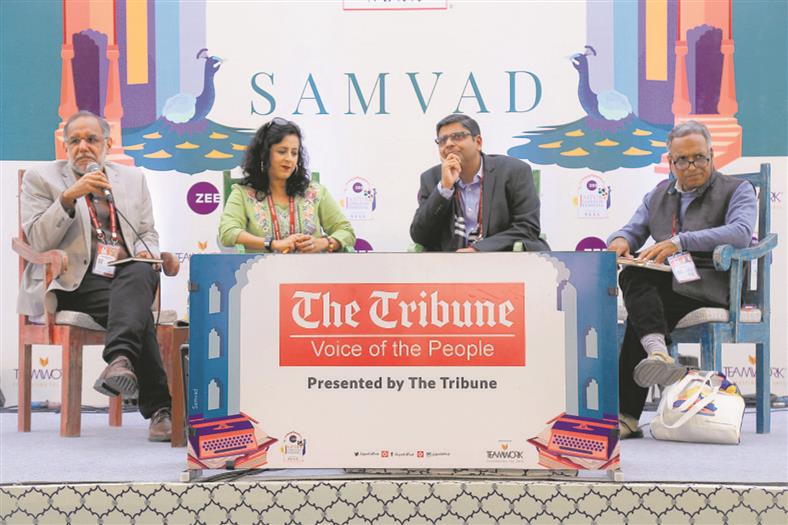 The Tribune Editor Rajesh Ramachandran (second from right) at a session during the Jaipur Literature Festival on Sunday. Tribune photo

Was Jallianwala Bagh massacre a premeditated conspiracy by the British as against a momentary lapse of judgement as is widely believed? What was the role of then The Tribune Editor Kalinath Ray in Rabindranath Tagore’s decision to relinquish his knighthood? What made Ray, a man of few words, take on the might of British imperialism?

In a thoughtful and incisive session themed Martyrdom to Freedom, The Tribune Editor Rajesh Ramachandran not only flagged these questions but also answered them lucidly, throwing light on the cataclysmic event that changed the trajectory of India’s freedom struggle. Talking about The Tribune book 'Martyrdom to Freedom; 100 years of Jallianwala Bagh' with an illuminating essay by Ramachandran, co-panellist Salil Mishra stressed how it marked The Tribune’s long association with nationalism.

Recalling the stern stuff of which Ray, otherwise a diminutive and shy man, was made of, Ramachandran reminded how nationalism existed in its true sense of the word in those days. Besides, people like him bore no rancour, held no enmity towards their adversaries and were only driven by cause and purpose of job at hand. Hence, even after serving imprisonment, he went about his business “matter of fact.”

Ramachandran revealed how not even for a moment did Ray lose the gumption to record the callousness and unpardonable, unrepentant attitude of Acting Brigadier-General Reginald Dyer, who ordered troops of the British Indian Army to fire at a crowd of unarmed civilians. Author and journalist Anita Anand, who moderated the session on the penultimate day of the festival and has penned 'The Patient Assassin' on martyr Udham Singh, provided insight into the traumatic period of the Indian history.

As many other aspects of the day unfurled, a significant query raised was — did the unprovoked firing at the innocent hasten the end of the British Raj in India?