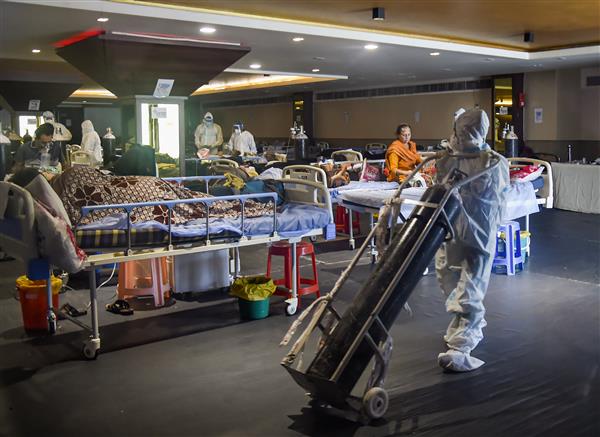 A health worker drags an oxygen cylinder at a banquet hall, converted into a COVID-19 isolation centre, in New Delhi, Thursday, May 6, 2021. PTI

The Delhi High Court on Thursday said the existing medical infrastructure in the national capital was “exposed” and in “shambles” when put to the test during the pandemic and directed the Delhi government to provide facility for medical treatment as required by all residents of the national capital who are suffering from COVID-19.

A bench of Justices Vipin Sanghi and Rekha Palli further said the government was behaving like an ostrich with its head in the sand if it was disputing that the medical infrastructure was not in shambles.

“Now you are behaving like the ostrich with its head in the sand. When you defend this situation, then you are not rising above the politics. We always call a spade a spade,” the bench said to senior advocate Rahul Mehra, appearing for the Delhi government, when he argued that the court may not say the medical infrastructure was in shambles.

He said the government has several initiatives, like augmenting beds by 15,000 and ICU beds by 1,200, which are in the pipeline and the oxygen is also coming in.

To this the court remarked, “It is not just oxygen. Is oxygen enough? If you have oxygen, do you have everything?”

“Pipeline is pipeline. They are not there now,” the bench added.

The observations and direction came while hearing a 53-year-old COVID patient’s plea for an ICU bed with a ventilator as his SPO2 levels had fallen to around 40 and he was unable to get ICU beds anywhere. PTI