Over 1,000 troops of each side are still in the valley, ridges 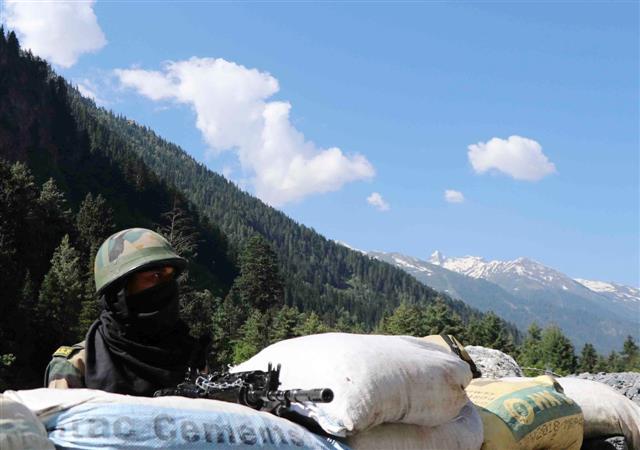 A BSF jawan stands guard inside a bunker at a checkpoint on Srinagar-Leh National highway leading to Ladakh, at Gagangeer, 81 km from Srinagar, on Wednesday, June 17, 2020. Tribune photo: Amin War

A meeting of senior military officials of India and China at Galwan valley along the Line of Actual Control (LAC) in Ladakh ended in a stalemate on Wednesday.

The People’s Liberation Army (PLA) has not pulled back all its troops from the Galwan valley, nor has it removed all the military-grade arctic tents which house its troops.

The two sides have disengaged from the spot of the clash, however, it is not as if the Galwan valley or the ridgelines around the valley are free of troops. More than 1,000 troops of each side are still in the valley and ridges that is some 6 km long.

The Indian side is seeking that all personnel of the PLA withdraw or disengage from the wider area of the Galwan valley. Expecting that PLA has dug in its heels, the Indian military is keeping its options open.

The clash occurred at south bank of Galwan river, which flows in an east-west direction before it’s confluence with Shayok river.

The officials, India represented by a Major General, are slated to meet again tomorrow, sources said.

The meeting was conducted at ‘patrolling point 14’ along the Galwan valley. Major General Abhijit Bapat, the Commander of the 3 Division of the Indian Army, raised several points with the Chinese with regards to the incident on the night intervening June 15 and 16 when 20 Indian soldiers were killed in action. There have been casualties on the Chinese side; those numbers are not verified.

The meeting today was ‘tense’, sources said, adding that PLA was being ‘obstructionist’ since Tuesday morning – hours after the clash. They did not allow Indians to rescue their men at the south bank of the Galwan. The Major General had to intervene.

Do not wish to see more clashes in Galwan Valley: China Foreign Office

Loss of soldiers in Galwan deeply disturbing and painful: Rajnath

Why is PM 'silent', why is he 'hiding', asks Rahul on India-China face-off