Midnight movement for return of farmers to Delhi border protest sites begins from UP, Haryana, Punjab 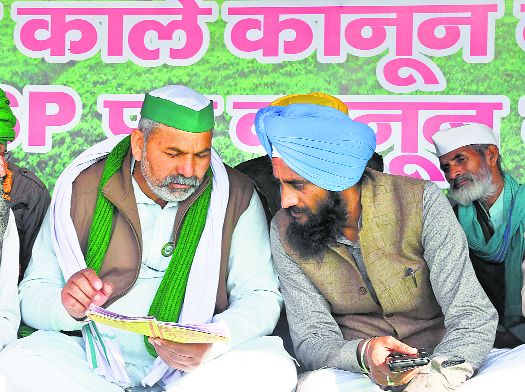 The situation at the Ghazipur border eased out after midnight as the security forces were withdrawn from there. While the reason behind the withdrawal of security forces was not announced, security officials said they had been asked to go back as they were on duty since previous morning. All senior police officials left the spot around 1.30 a.m.

Electricity supply at the protest site, which had been cut, was also restored after midnight.

The situation was tense at the Ghazipur border after the tractor rally organised by the farmers' unions on Republic Day turned violent in the national capital.

A major movement of farmers back towards Ghazipur and Singhu protest spots started overnight in solidarity with Bharatiya Kisan Union spokesperson Rakesh Tikait, after he defied orders by the local administration to vacate the protest site. The Congress and RLD backed the farm union.

Tikait, among 37 leaders booked by Delhi Police for the Republic Day incidents, alleged there was a plot to “attack and kill” farmers and refused to budge despite Ghaziabad DM’s orders to clear the site by night.

Rakesh Tikait's tears do the trick, protesters expected to increase at Ghazipur border

Arrangements for drinking water, other facilities in place for farmers at Ghazipur border: Sisodia

Rakesh Tikait takes a dig at Baba Ramdev, says he will not run in ‘salwar kameez’

“Police officials are here to take us away and a BJP MLA is waiting with supporters to attack and kill farmers,” Tikait alleged. “Anyone from the BJP will be taken hostage. I will hang myself but won’t call off protests until the farm laws are repealed,” he warned as police deployment at the site increased. Congress leader Rahul Gandhi and RLD chief Ajit Singh backed Tikait.

Following his emotional outburst, farmers on tractors-trailers from the states of Uttar Pradesh, Haryana, and Punjab started moving towards various Delhi border protest sites in large numbers around midnight.

The Jind-Chandigarh highway was blocked by farmers at Kandela village in Haryana. Slogans of Punjab-Haryana unity were raised by the gathered farmers.

In a late-night message, Punjab farmer leaders Jagjeet Singh Dallewal and Rajinder Singh Deep SinghWala appealed to people to reach Delhi borders to “save the farmers' movement”. They said the police attempt to clear the Ghazipur border was just the beginning, the same would be attempted at Singhu and Tikri also.

Several protesters at Ghazipur waved the Tricolour, with some waving flags of farmer unions like Kisan Ekta Manch amid a continuous sloganeering of "Jai Jawan, Jai Kisan", while many were lying down on mattresses covered in blankets as they braved bone-chilling cold and wind.

"Zaroorat padi to khade rehke dharna denge, tum dharne pe baithe rehne ki baat karte ho (I can protest while standing, and you are asking whether I am going to continue the sit-in)," Jagat Singh Rathi, 78, told PTI. With a muffler tied around his head and a stick in his hand for support while walking, the septuagenarian from Meerut said that he had been at the BKU's protest since its beginning on November 28.

A "verbal" communication from the district administration to the BKU had come on Thursday close on the heels of three farmer unions withdrawing their protest against the farm laws over the violence in Delhi on Republic Day.

Ghaziabad District Magistrate Ajay Shankar Pandey had communicated to the protestors camping at the UP Gate at Delhi border to vacate the spot, or “the administration will remove them”, a district official had told PTI.

Thousands of protesting farmers have been protesting at Delhi's borders with Haryana and Uttar Pradesh demanding the rollback of the Farmers' Produce Trade and Commerce (Promotion and Facilitation) Act, 2020, the Farmers (Empowerment and Protection) Agreement on Price Assurance and Farm Services Act, 2020 and the Essential Commodities (Amendment) Act, 2020.

The protesting farmers have expressed apprehension that these laws would pave the way for the dismantling of the minimum support price system, leaving them at the "mercy" of big corporations.

However, the government has maintained that the new laws will bring farmers better opportunities and usher in new technologies in agriculture.