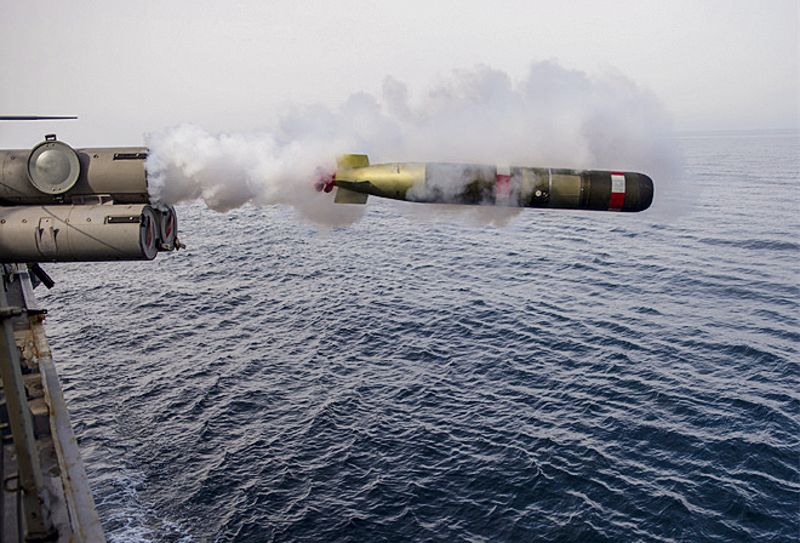 The Navy will strengthen its anti-submarine capability with the Defence Ministry signing a contract with the US Government for the procurement of MK 54 Torpedo and expendable (chaff and flares) at a cost of Rs 423 crore.

The Navy will strengthen its anti-submarine capability with the Defence Ministry signing a contract with the US Government for the procurement of MK 54 Torpedo and expendable (chaff and flares) at a cost of Rs 423 crore.

In April, the US Department of State had approved this Foreign Military Sale to India at an estimated cost of $63 million. The principal contractor for the first deal is Raytheon Integrated Defense System.

The Navy will further augment its capabilities with another deal in the pipeline. This entails the acquisition of 10 AGM-84L Harpoon Block II air-launched missiles and related equipment at an estimated cost of $92 million. Boeing is the principal contractor for the equipment in the Harpoon deal.

India plans to use the equipment requested in both deals on the Indian Navy’s Boeing P-8I maritime aircraft. The MK 54 lightweight torpedoes are used by US surface ships, fixed-wing aircraft and helicopters and are their primary anti-submarine warfare weapon.

The US has said this sale will be an important force for political stability, peace, and economic progress in the Indo-Pacific and South Asia region.

US surface ships, fixed-wing aircraft and helicopters will use these as primary anti-submarine weapon