Modi appeals to agitators to give farm laws a chance

'MSP was there, it is there and it is going to be there in future' 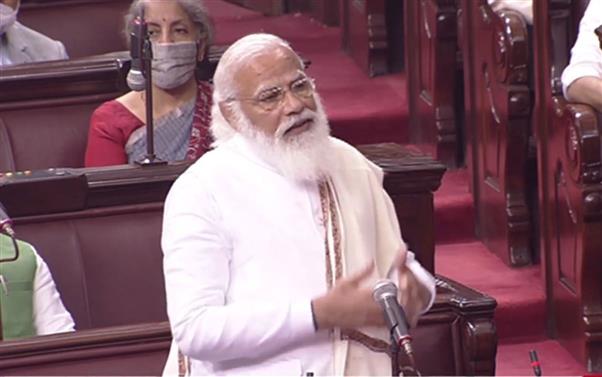 Prime Minister Narendra Modi on Monday appealed to agitating farmers to give the new farm laws a chance and see if these laws bring a positive change to their lives.

“If there is any drawback in the laws, these would be corrected. If there is a loose end somewhere, it will be tightened. Our doors are open for suggestions," the Prime Minister said.

Modi, while giving his reply at the Rajya Sabha to the debate following the President’s address on the inaugural day of the Budget Session on January 29, asserted that the system of Minimum Support Price (MSP) for crops would continue to remain in practice.

“MSP was there, it is there and it is going to be there in future”, Modi said. He also assured that there was no question of the abolition of distribution of ration through the PDS. He said 82 crore people availed ration from the PDS.

Mandis would be modernized, the Prime Minister said and added that a provision had been made in the current budget for this purpose.

The Prime Minister implored the farmers camping at the outskirts of Delhi demanding the repeal of the three farm laws to return home. “It does not feel nice. There are also old people in the gathering,” the Prime Minister said.

Modi also appealed to the MPs to request the agitating farmers to leave. “If the laws produce an adverse impact, pass the blame to me–if the laws work, take all the credit,” the Prime Minister told the opposition MPs and sought their cooperation.

“We should not spread misinformation. We have been entrusted with serious responsibility by people,” Modi said.

Stating he was happy that Manmohan Singh was present in the House, Modi said the idea of a “one large common market” for agricultural produce was also envisaged by the former Prime Minister.

To substantiate his claim, Modi quoted Manmohan Singh as having said that the existing marketing regime prevented farmers from selling their produce where they could get the highest rate of return.

“It is our endeavour to remove all those handicaps that came in the way of India realizing its vast potential as one large common market,” Modi quoted Manmohan Singh as having said.

A whopping 12 crore people fall in this category of farmers.

Modi added that these farmers, who are not given a loan by banks and so do not benefit from loan waiver schemes introduced by state governments as a political sop, will benefit from the new farm laws.

Modi claimed that while a lot of words had been said in the House regarding the agitation against the farm laws, not much was said to challenge the laws itself.