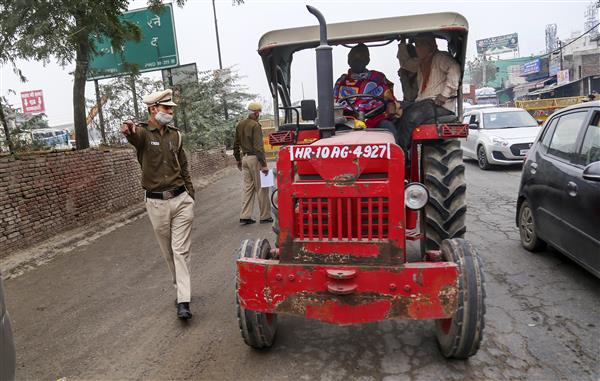 Police check vehicles at Singhu border ahead of the scheduled farmers’ protest march to Delhi on November 26-27 against the Centre’s new farm laws in New Delhi on Wednesday. PTI photo

A “Samyukt Kisan Morcha” of different alliances of farmer organisations from all over India today condemned the “crackdown of BJP governments on peaceful farmers’ movements struggling for their basic entitlements”.

The actions of Haryana government in arresting more than 72 farmer leaders in the state and sealing the borders with Punjab and Delhi, and the news of Uttar Pradesh government also mounting obstacles to farmers reaching Delhi to join the “Dilli Chalo” call came under severe fire from farmer leaders of different states, a statement said.

“The arrogant statement of the Haryana CM that farmers struggle will not be permitted and crushed has shown the undemocratic character of the BJP government and farmers organisations have accepted the challenge of the CM---come what may, farmers will continue with the Dilli Chalo call and resist all attempts to thwart the movement,” it said.

“By arresting leadership of farmers, the BJP Government is making a futile effort to arrest and imprison a nation-wide movement of millions of farmers, which is impossible and only autocratic mindsets can attempt such anti-people plans,” it added.

Meanwhile, trade unions as well as political parties are organising protests against the government’s action in Haryana, in mounting criticism against the crackdown.

“The Modi Government in the Centre is taking the support of BJP state governments to prevent a peaceful assembly of farmers in Delhi, where farmers want to press for the repeal of the 3 Central Farm Acts and withdrawal of the Electricity Bill 2020. This clearly shows that the government is scared about farmers and their legitimate demands. It knows that farmers are able to see through the lies and hype of the government about these new laws that have ostensibly set farmers free,” said the statement released by the Samyukt Kisan Morcha.

Addressing a virtual press conference organised today, members of the Coordination Committee reiterated that farmers are not going to be intimidated by such repressive tactics of the government and will march ahead with more determination and in more numbers.

“The Prime Minister should note that what farmers are asking for is legitimate – they are seeking protection from exploitation at the hands of big corporations and others and not receiving remunerative prices. The government should note that this agitation is all over India and not just Punjab, where the government is extending an invitation for talks with only the Punjab farmer unions. The farmers are reminding the PM about his, his party’s and his government’s commitment about guaranteed remunerative prices to all farmers”, said the Morcha members.

The Morcha reported that farmers from Madhya Pradesh, Haryana, Punjab, Uttar Pradesh and Rajasthan are determined to march into Delhi and lakhs of farmers are getting mobilised.