Day-long visit was aimed at getting first-hand perspective of the preparations, challenges and roadmap in India’s endeavour to vaccinate its citizens 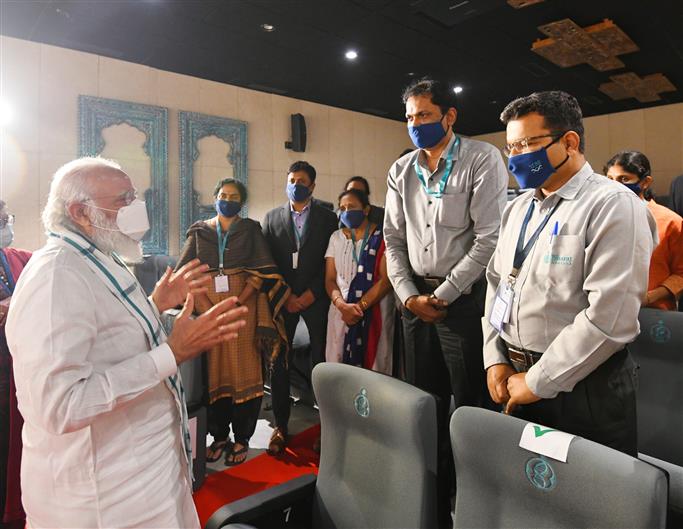 The Prime Minister’s Office (PMO) said the day-long visit was aimed at getting a first-hand perspective of the preparations, challenges and roadmap in India’s endeavour to vaccinate its citizens.

“Visited the Zydus Biotech Park in Ahmedabad to know more about the indigenous DNA based vaccine being developed by Zydus Cadila. I compliment the team behind this effort for their work. Government of India is actively working with them to support them in this journey,” Modi tweeted after the visit.

Zydus Cadila chairman Pankaj Patel recently said the company is aiming to complete the vaccine trial by March 2021, and could produce up to 100 million doses a year.

Modi spent over an hour at the plant, before leaving for the airport, from where he left for Hyderabad at 11.40 am.

Modi landed at Hakimpet Air Force station near Hyderabad around 1 pm and proceeded to pharma major Bharat Biotech’s vaccine manufacturing facility at Genome valley, located around 20 km from the air station, by road.

At the facility, he reviewed the progress of Covaxin, a vaccine candidate being developed by the company. He also interacted with Bharat Biotech Chairman and Managing Director Krishna Ella, scientists and senior management.

“At the Bharat Biotech facility in Hyderabad, was briefed about their indigenous COVID-19 vaccine. Congratulated the scientists for their progress in the trials so far. Their team is closely working with ICMR to facilitate speedy progress,” Modi tweeted after his hour-long visit there.

After leaving the facility, Modi got down from his vehicle at the main gate and waved to media persons and the cheering crowd standing nearby.

Covaxin, being developed by Bharat Biotech in collaboration with the Indian Council of Medical Research and National Institute of Virology, is undergoing phase-3 trials.

At 3.20 pm, Modi took off for Pune, where he landed at 4.30 pm. From the airport, Modi proceeded by helicopter to the Serum Institute of India (SII) at Manjari, located 17 km from the airport.

Modi interacted with scientists at the Serum Institute of India and went around the facility, taking stock of vaccine development work being carried out there, before leaving for the Pune airport around 6 pm on way back to Delhi.

Modi’s visit to SII was aimed at reviewing the progress of the vaccine candidate for coronavirus and to know about its launch, production and distribution mechanism, an official said.

Serum Institute of India has partnered with pharma giant AstraZeneca and Oxford University for the vaccine. PTI