Modi targets Rahul over his ‘north-south’ remarks, lashes out at Narayanasamy 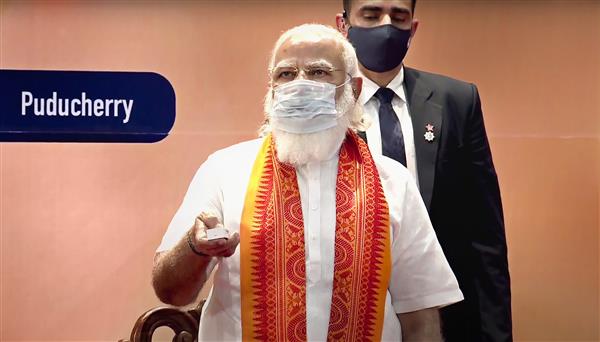 Hitting out at the “Congress culture” at a public meeting in the poll-bound union territory, he said people were witness to it in the last five years.

“Our colonial rulers had the policy of divide and rule. Congress has a policy of divide, lie and rule. Sometimes their leaders put region against region... community against community,” he said in an apparent reference to Gandhi’s recent ‘north-south’ remarks which the BJP opposed strongly.

During his Kerala visit on Tuesday, Gandhi had said he was used to a “different type of politics” in north India and coming to the southern state was “very refreshing” as people are interested in “issues”.

Modi also expressed ‘shock’ over Gandhi’s statement that there was no ‘dedicated’ fisheries ministry at the Centre, adding the NDA government had set it up in 2019 and that its budgetary allocation has substantially gone up ever since.

Averring that the people of Puducherry did not deserve a “high command” government that would serve a few Congress leaders, Modi assured that the NDA government, if voted in the coming elections, would treat people as its high command.

Modi inaugurated a slew of completed projects here and laid the foundation stone for others, including in the ports and highways sectors.

The Prime Minister inaugurated a Blood Centre at state-run JIPMER, a Sports Authority of India (SAI) girls hostel at Lawspet and a reconstructed Heritage Mairie Building.

Modi laid the foundation stone for the four-laning of Sattanathapuram-Nagapattinam National Highway section, Medical College Building at Karaikal New Campus of JIPMER-Phase I and the development of Minor Port at Puducherry under Sagarmala scheme.