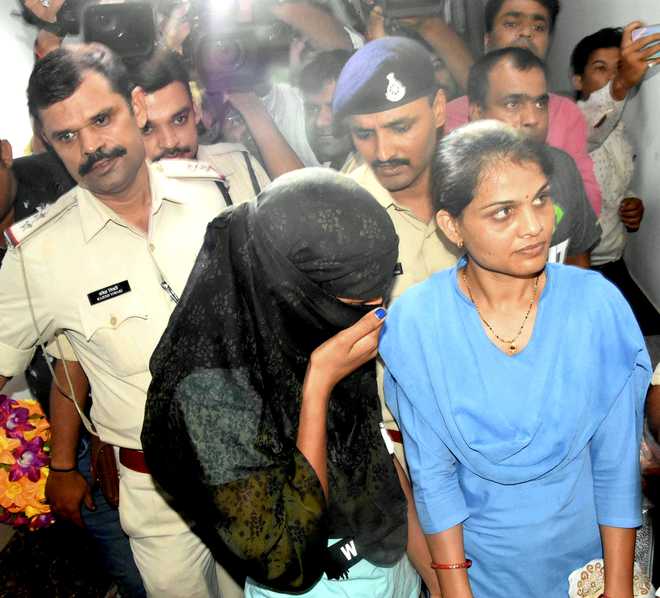 Police produce one of the accused in honeytrap case for spot investigations in Bhopal. PTI file photo

The Indore Municipal Corporation on Wednesday demolished the office of runaway businessman Jitendra Soni’s eveninger that published news on the honey-trap case involving officials and politicians.

The Indore Municipal Corporation (IMC) razed the office of ‘Sanjha Lokswami’, which was allegedly illegally constructed on more than 2,500 sq ft land, an official said.

“We have demolished the office of Sanjha Lokswami, which is illegally constructed on more than 2,500 sq ft land in Press Complex area,” IMC commissioner Ashish Singh said.

No permissions were taken from the IMC for the construction of this office, he added.

“After receiving complaints about the structure, we issued notices to the office owner seven days ago, but we didn’t receive any reply and no papers related to permissions were furnished,” he said.

Earlier this week, the civic body razed Soni’s bungalow in Shantikunj Colony, stating that it had been constructed on a land earmarked for a public garden.

Some illegally constructed portions of Soni’s properties, including a bungalow on Kanadia Road, a nightclub at Geeta Bhawan Square, a hotel in South Tukoganj and a restaurant in New Palasia area, were torn down last week.

The police had announced a reward of Rs 30,000 on Soni, who is wanted in more than 30 cases, including human trafficking, a police official said.

The businessman has been on the run since November 30 when his night club and other establishments were raided in connection with the honey-trap case. As many as 67 women and seven children were rescued in those raids.

Soni’s media firm had published news about some audio-video clips allegedly linked to the honey-trap case.

Last week, suspended IMC engineer Harbhajan Singh, the complainant in the honey-trap case, filed an FIR against Soni under the Information Technology Act.

In his complaint, Singh alleged that Soni had published objectionable material against him through different medium of communication, which amounted to infringement of his privacy.

In September, five women and a man were arrested from Indore and Bhopal for allegedly running a honey-trap and blackmailing racket.

The racket was busted after Singh approached the police, claiming he was being blackmailed over some objectionable video clips by the accused who were trying to extort money from him. —PTI