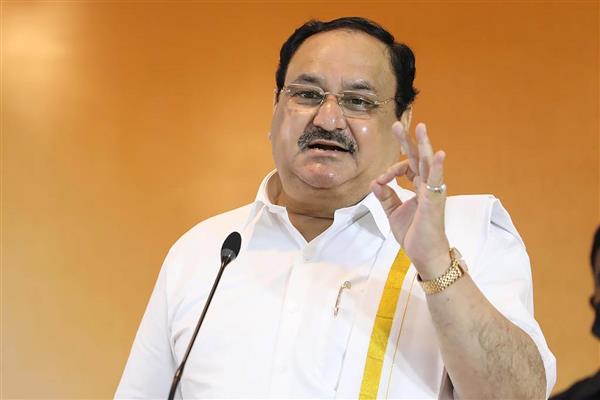 BJP president JP Nadda on Sunday asserted that his party would sweep the coming Puducherry assembly elections and assured people of the Union Territory a corruption-free and development-oriented government.

Alleging that corruption was rampant under the Congress government led by Chief Minister V Narayanasamy, he said the BJP would win 23 of the 30 seats in the Union Territory assembly in the polls, likely in the next few months.

The BJP in the UT has received a shot in the arm with former minister A Namasivayam joining the party along with a former MLA recently.

“...for the past 35 years under the Congress rule, 52 per cent of the population in the UT is below the poverty line,” Nadda claimed, adding corruption extended to admissions in colleges offering professional courses as well.

Addressing a grand first election public meeting here, Nadda said the Congress government did not conduct local body elections for a long time and Central seats in colleges were not allotted to Puducherry students “due to corruption”.

While 70 per cent was the grant in aid to Puducherry from the Centre during former Prime Minister Atal Bihari Vajpayee’s tenure, it was cut to 30 per cent when Narayanasamy became a Minister at the Centre, he claimed.

Puducherry went into a debt trap while 76 per cent of youth were unemployed and employees belonging to the cooperative sector like Khadi Cooperative Federation have not been paid salary for over four years, he claimed.

Assembly elections are expected in April or early May in Puducherry.

“When Narayanasamy was a Central minister, he waived Rs 5,000 crore loan of Jharkhand but did not waive the loan of Puducherry,” Nadda said adding this was the type of “justice” the present Chief Minister did met out to the UT.

Senior leaders were leaving the Congress, he said and welcomed them into the Saffron party’s fold, expressing confidence that the “lotus” was set to bloom in Puducherry and capture power.

Namasivayam, number 2 in the Narayanasamy cabinet, was among those who recently quit the Congress and joined the BJP.

He has accused the Chief Minister of sidelining senior Congress leaders.

He assured the people of a government that would be free of corruption and focused on development of the Union Territory.

“When we are talking about one nation, one ration card, we find that the ration shops are closed in Puducherry,” he said.

While the Centre was for opening more industries to nurture growth, textile mills and industrial units in Puducherry were being closed down in view of “mismanagement” and “corruption”.

Once the BJP assumes power, salary arrears would be paid to employees, closed down textile mills shall be reopened, sugar factories would be modernised and re-constructed and good quality roads shall be in place, he assured. PTI