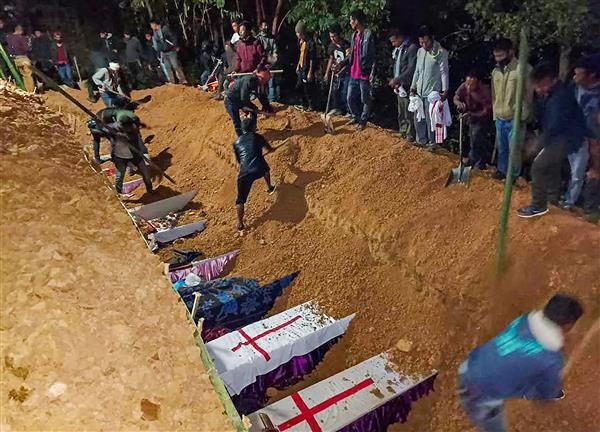 Coffins of the 13 people, who were allegedly killed by Armed Forces buried during their funeral in Mon district on December 6, 2021. PTI photo

The situation in Nagaland, where protests and rioting broke out after firing by security forces claimed 14 lives, remained tense but calm on Tuesday as the state Cabinet met and decided to write to the Centre demanding the repeal of the Armed Forces (Special Powers) Act.

The Cabinet, which held an emergency meeting under the leadership of Chief Minister Neiphiu Rio on Tuesday, also called off the ongoing Hornbill Festival in protest against the incident, state ministers said. The 10-day festival, the state’s largest tourism extravaganza held at Naga Heritage Village in Kisama, near the state capital, was scheduled to end on December 10.

During the meeting, the Cabinet was briefed about the action taken following the killing, including setting up of an SIT headed by an IGP-rank officer and grant of ex gratia to the next of kin of the deceased by the state and central governments, ministers Neiba Kronu and Temjen Imna Along told reporters.

The Cabinet has directed the SIT to complete the probe within a month. The Army has ordered a court of inquiry headed by an officer of Major-General rank into the incident, official sources said.

Kronu said 14 civilians died in the incident, while two seriously injured were undergoing treatment in neighbouring Assam, and six were being treated in Dimapur.

The firing incidents took place in the Oting-Tiru area on December 4 and Mon town on December 5. A report submitted to the state government on Sunday claimed the Army made no attempt to ascertain the identity of the civilians returning from work on a pick-up truck before shooting them on Saturday. — PTI