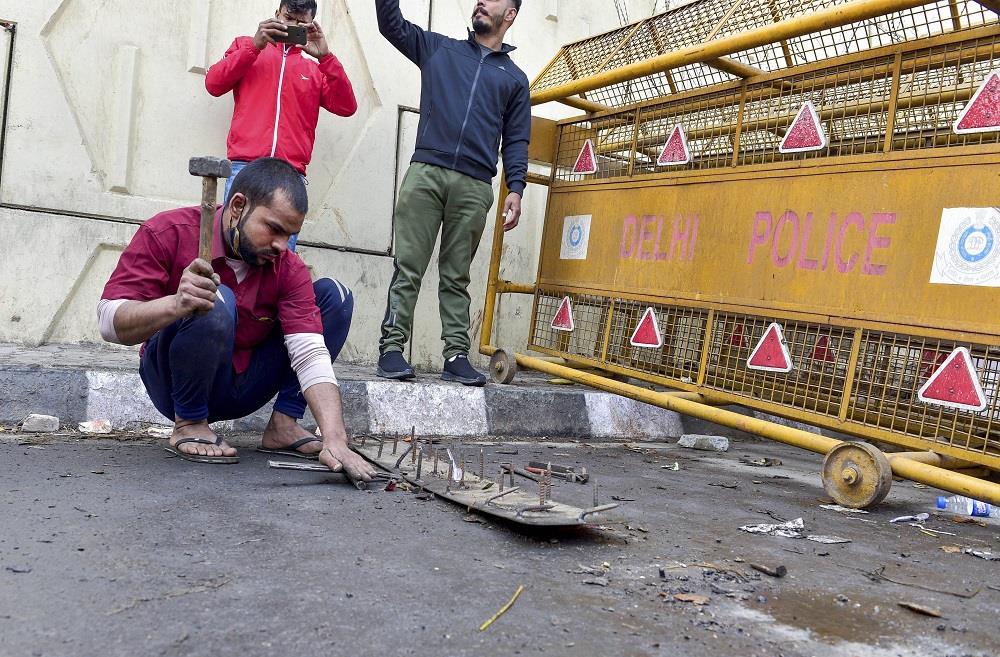 A worker removes nails, placed to block farmers from marching towards the national capital, during their ongoing agitation against farm reform laws at Ghazipur border, in New Delhi on Thursday. PTI Photo

Iron nails studded on roads at Ghazipur border to restrict the movement of farmers agitating against the new agri laws are being “repositioned”, a senior police officer has said on Thursday.

The statement comes after videos and photos of workers removing the nails near Ghazipur border surfaced on social media.

Deputy Commissioner of Police (East) Deepak Yadav asserted that the security arrangements at the border would remain the same.

#WATCH | Nails that were fixed near barricades at Ghazipur border (Delhi-UP border) are being removed. pic.twitter.com/YWCQxxyNsH

I scribbled notes of farmers in Tihar on my legs to write report: Mandeep Punia

“Videos and photos are getting circulated in which it is shown that nails are being taken off at Ghazipur. These are just being repositioned. Security arrangement at the border remains the same,” he said.

Security arrangements continue to be strengthened at Ghazipur border, days after Bharatiya Kisan Union leader Rakesh Tikait’s emotional appeal had galvanised farmers from Uttar Pradesh and Uttarakhand to flock to the Delhi-UP border.

Drones have also been deployed to monitor the protesters.

Farmers from Punjab, Haryana and Uttar Pradesh have been camping at Delhi’s borders for weeks, seeking a repeal of the three agriculture laws.

They claim that the new laws will weaken the minimum support price (MSP) system. But the Centre says the laws will only give farmers more options to sell their produce. PTI