Neither has any ‘mandi’ shut nor has MSP stopped, says PM Modi; Cong, TMC stage walkout 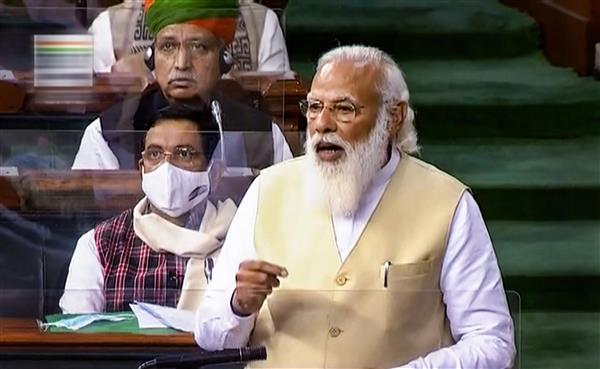 Prime Minister Narendra Modi on talked of taking India forward in the new world order in the post-Corona period through self-reliance, accused ‘andolanjeevis’ of exploiting the ‘pavitra andolan’ (sacred agitation) of farmers, mocked the Congress for being a “divided and confused house”, slammed the Opposition for “planning strategic disruptions” and once again urged agitating farmers to come forward for discussions.

Defending the three farm laws, the PM said they had been enacted in line with the need of the times, to meet new challenges in the agriculture sector. Countries are not run on status quo and leaders will have to take responsibility for desired change, he said, speaking in the Lok Sabha during the motion of thanks on the President’s address amid disruptions by Opposition MPs.

The PM said differentiation will have to be made between ‘andolankaaris’ and ‘andolanjeevis’.

Read also: Farmers to hold ‘rail roko’ protest on Feb 18 from 12 pm to 4 pm across India

“Kisan andolan is “pavitra” (pure) but when ‘andolanjeevis’ use it to further their interest, showcase photos of those jailed for serious offences like terrorism, does it serve any purpose? Not allowing toll plazas to function...destroying thousands of telecom towers in Punjab, is it ‘pavitra bhavna’,” he questioned.

The PM said India has to be “atmanirbhar” to cement her place in the post-Corona period.

“The credit for dealing with the fear of unknown goes to the discipline of 130 crore Indians. India not only overcame the crisis to become self-reliant but also helped other countries”. Taking a swipe at Congress’ Punjab MP Manish Tewari who had attributed India’s tapering figures to “God’s grace”, the PM said he agree with the observation. “It is because India’s front-line health workers, doctors and nurses, ‘safai karamcharis’ and ambulance drivers became the ‘roop’ (incarnation) of ‘bhagwaan’ (God) and saved us,” Modi said.

Asserting that the government is ready to accept farmers' logical suggestions, PM said provisions in the laws are “optional and not compulsory” and that old system will continue. "Rumours are being spread that these laws are against farmers," he said. "I want to ask if any farmer has faced any change after the laws were implemented," he said, adding that provisions in the new laws are "optional" and "nothing is compulsory".

Old ‘mandis’ have not stopped, on the contrary they are being modernised, he said.

Amid protests by Opposition MPs, the PM said the laws are important for the nation’s progress. “No one asked for laws against dowry, triple talaq… but these laws were enacted because they were progressive. No one asked for Ayushmaan Bharat, Swachch Bharat or Jan Dhan Yojana but they were implemented,” he said questioning the oft-repeated argument that no-one had “asked” for the three farm laws so why they were implemented.

It cannot be status quo anymore, he said, pointing to the increasing number of landless labourers and agriculture becoming unremunerative. “This is disturbing because it means that there are not adequate investments in the sector,” he said asserting for more investments to boost employment in the sector. Farmers also need to diversify towards more paying crops, he said. Apparently referring to this criticisms of “corporate” take-over he said “if public sector is important for the country so is private sector” as wealth creators are important for wealth to be distributed.

Reaching out to agitating farmers, he said the Government and the Parliament have great respect for those voicing views on the three farm bills, which is why topmost ministers have been talking to them. Allayed apprehensions, he said neither any ‘mandi’ has shut down nor has the MSP stopped, rather the MSP has increased.

The PM said those disrupting the House are doing so “as per a well-planned strategy as they are unable to digest that people can see the truth”. In a sharp dig at the Congress, he said “the condition of the Congress party, a very old party which ruled the country for about six decades, has now become such that its Rajya Sabha unit moves in one direction while the Lok Sabha unit moves in another direction”. “Nothing can be more unfortunate than this. The Congress is also there in Rajya Sabha. Their senior leaders debate with a lot of enthusiasm and express their views. On the other hand, there is the other section of the Congress (in Lok Sabha),” the PM said as the Congress staged a walkout along with the TMC while he was speaking.