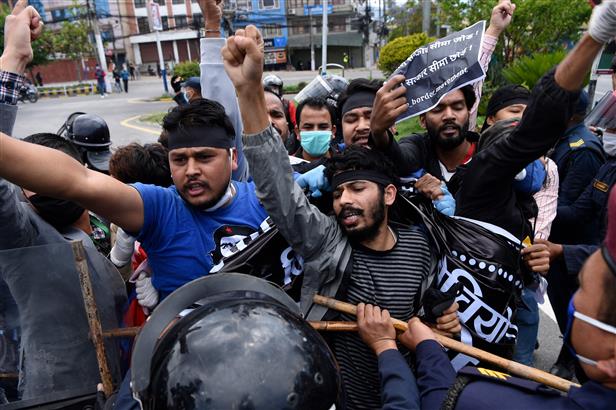 Police detain demonstrators during a protest against India's newly-inaugurated link road to the Chinese border, in Kathmandu on May 9, 2020. AFP

The Ministry of External Affairs (MEA) has said the recently inaugurated road section in Uttarakhand’s Pithoragarh district lies completely within the territory of India.

The MEA was reacting to a press release by the Nepalese Foreign Ministry that expressed regret over Defence Minister Rajnath Singh’s inauguration of a faster route for pilgrims of the Kailash Mansarovar Yatra.

Also read: India connects to LAC, Kailash Yatra is a road ride away from Delhi

Nepal claims the road traverses Lipulekh over which it lays claim. But the MEA said the same path was being used by pilgrims and under the present project, it has been made pliable for the ease and convenience of pilgrims, locals and traders.

Nepal lays claim over all territory east of Kali River and maintains that there is a disagreement with India over three strips of land, including Lipulekh. A controversy had erupted in November when India included another disputed patch, Kalapani, in its territory in a new political map.

MEA spokesperson Anurag Srivastav reiterated the stand MEA had taken at that time. He said, “India and Nepal have an established mechanism to deal with all boundary matters. The boundary delineation exercise with Nepal is ongoing. India is committed to resolving outstanding boundary issues through diplomatic dialogue and in the spirit of our close and friendly bilateral relations with Nepal.”

The MEA also hoped that the two Foreign Secretaries would meet as soon as the respective governments have dealt with the Covid pandemic.

Interestingly, China has a stake in the road since it signed an agreement with India in 2015 to expand trade via Lipulekh and other border points. India and China consider Lipulekh as a trijunction whereas Nepal claims that it has sovereignty over it.

After the Lipulekh controversy emerged, Nepalese Foreign Secretary Shanker Das Bairagi reportedly spoke to the Indian envoy Vinay Mohan Kwatra to reiterate Nepal’s concern and its position on the dispute.

In the aftermath of the Kalapani controversy, Nepal government had formed two committees and Nepal Prime Minister KP Sharma Oli had promised to reclaim the disputed land but no talks have been held with New Delhi on the issue.

The Border Roads Organisation (BRO) had completed work on the Ghatiabgarh-Lipulekh road on April 17 so that instead of a three-day trek it will now be a two-day drive from Delhi to the pass.

Critics say Nepal was late in reacting to the Kalapani issue in 2015 as it protested only after India and China had signed an agreement to expand trade by improving the infrastructure. The road also helps India’s border security apparatus since a security post on the border will be better connected.