The round patch, worn on the right sleeve, was issued by the Air Headquarters earlier this year 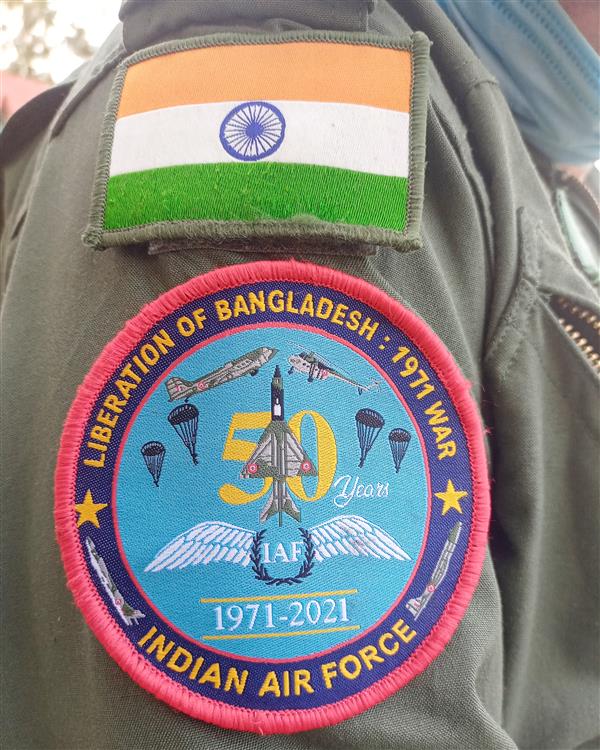 Many IAF personnel have been seen wearing the patch on their flying overalls. — Tribune Photo

The Indian Air Force has come up with a new uniform patch that commemorates the golden jubilee of the Liberation of Bangladesh during the 1971 Indo-Pakistan war.

Many IAF personnel have been seen wearing the patch on their flying overalls.

The round patch, worn on the right sleeve, was issued by the Air Headquarters earlier this year as the nation entered the 50th year of the war that was fought both on the eastern and western fronts.

All three services are commemorating the event, referred to as India’s Golden Hour, in various ways.

The IAF, then led by Air Chief Marshal Pratap Chandra Lal, played a decisive role during the war and within the first few days, gained air superiority over Pakistan in both the theatres.

Logging over 16,000 sorties, including those by transporters and helicopters, it undertook air defence, deep interdiction, recce, para-drop and heli-borne missions besides providing close air support to advancing Indian Army formations and assisting the Indian Navy in the maritime domain.

The air raid on Governor’s House in Dacca (now Dhaka), attacks on Tezgaon, Murid and Kurmitola airfields, para-drop over Tangail and heli-bridge over the Megna River are among the IAF’s well documented achievements in the eastern theatre.

During the famous Battle of Laungewala on the western front, the IAF destroyed more than 20 Pakistani tanks, four armoured personnel carriers and a supply.

It also undertook strategic raids on oil installations in Karachi, the Mangla Dam and a gas plant in Sindh.

It was also in the western theatre that the IAF won its sole Param Vir Chakra, the highest gallantry award, when Flag Officer Nirmaljit Singh Sekhon of No.18 Squadron had taken on intruding Pakistani Sabre jets over Srinagar.