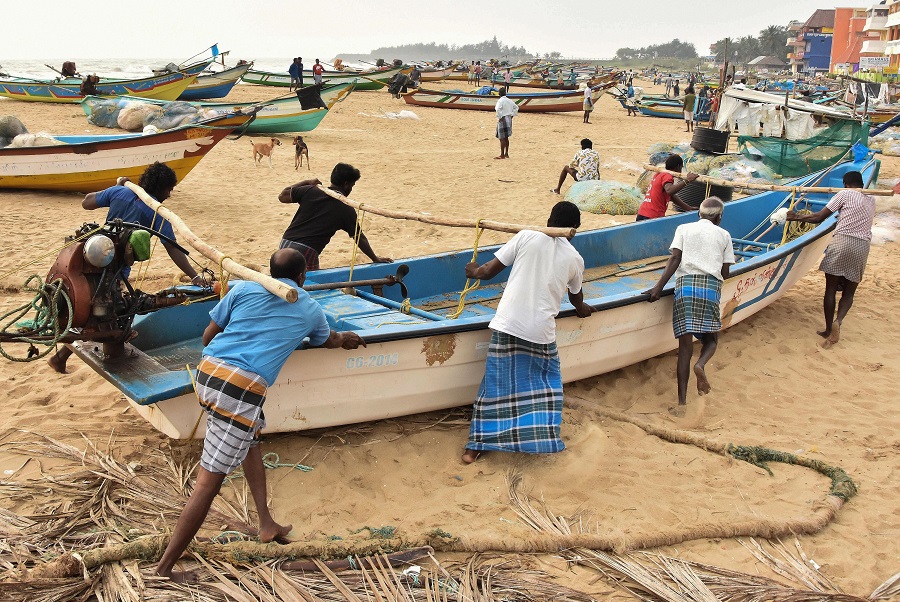 Nivar is expected to make the landfall as a 'very severe cyclone' with a wind speed of 120-130 kmph gusting to 145 kmph, the IMD has said. PTI

Torrential rains accompanied by gusty winds lashed several parts of Tamil Nadu and Puducherry on Wednesday, inundating many localities while over one lakh people were moved to shelters as ‘Nivar’ intensified into a very severe cyclonic storm and is closing in on the coast.

In its latest bulletin, the IMD said the storm was likely to cross the coast between Karaikal in Puducherry and Mamallapuram, about 60 km from here, “during the midnight of November 25 and early hours of 26 November” with a wind speed of 120-130 kmph gusting to 145 kmph.

With rains under the influence of the cyclone drenching the city and several other parts of the state, authorities have evacuated over one lakh people and housed them in shelters besides disconnecting power supply in vulnerable areas as a precautionary measure.

It is moving slowly and according to experts, slow-moving cyclones gather more energy as they move towards the land. ‘Super cyclone’ is the highest category of tropical storms, starting with a ‘depression’ and graduating to ‘cyclone/deep depression’, ‘severe cyclone’, ‘very severe cyclone’ and ‘extremely severe cyclone’.

The first ‘super cyclone’ of the century, Amphan, made a landfall in May at the West Bengal–Bangladesh coasts as an ‘extremely severe cyclone’ with a speed of 155-165 kmph gusting to 185 kmph.

Tamil Nadu and Puducherry are on high alert. Apart from coastal and north-interior Tamil Nadu, Puducherry and Karakkal, a red alert has also been sounded for heavy to extremely heavy rains in Rayalseema.

Cabinet Secretary Rajiv Gauba told a National Crisis Management Committee (NCMC) meeting with Chief Secretaries of Tamil Nadu, Puducherry and Andhra Pradesh and Secretaries of different ministries on Tuesday that the aim should be to ensure that there is no loss of life, damage is minimum and normalcy is restored in power, telecom and other important sectors in shortest possible time.

The National Disaster Response Force (NDRF) has deployed rescue personnel in Tamil Nadu, Andhra Pradesh and Puducherry. DG, NDRF, talked about the preparedness to meet the situation in next three days and said that 30 teams of NDRF had so far been deployed and 20 additional teams had been kept on standby for Tamil Nadu, Puducherry and Andhra Pradesh.

Fishermen have been advised not to venture into the sea and the people in coastal areas are also being evacuated to shelter houses. The Cabinet Secretary assured all necessary Central assistance to the state governments to overcome the situation.

Tidal wave of about 1 to 1.5 metre height above the astronomical tide is very likely to inundate the low-lying areas of north coastal districts of Tamil Nadu and Puducherry near the place of landfall. Damage is expected over Nagapattinam, Myladuthurai, Cuddalore  Villupuram and Chengalpattu districts of Tamil Nadu and Karaikal and Puducherry, the IMD said.

It includes total destruction of thatched houses/extensive damage to kutcha houses and some damage to old pucca houses.

There is potential threat from flying objects and bending/uprooting of power and communication poles. Widespread damage is also expected to standing crops, plantations, orchards in Tamil Nadu and parts of adjoining Andhra Pradesh, the IMD said. With PTI inputs