No democracy in India, only dictatorship: Rahul Gandhi 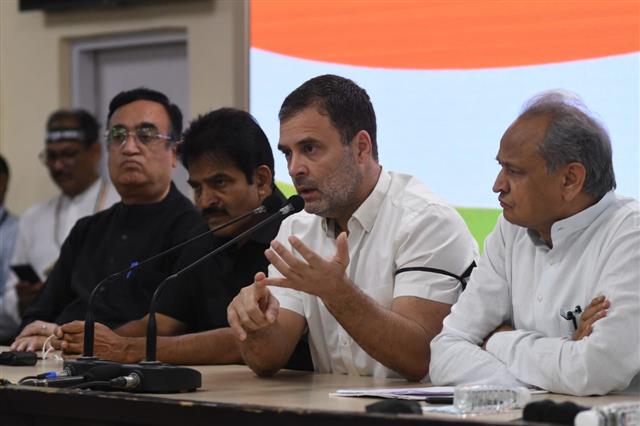 Congress leader Rahul Gandhi on Friday alleged that there was no democracy but only dictatorship in India and anyone who stood against the idea of this dictatorship is put in jail.

“How are you enjoying the onset of dictatorship in India?” Gandhi asked as the opening sentence of his press conference at the AICC headquarters ahead of Congress Party’s pan India agitation against price rise on Friday.

“Today, there is no democracy in India. Today, there’s a dictatorship of four people. We want to raise issues of unemployment, price rise, and social divisions. We are not allowed to speak in Parliament. We are arrested,” said Gandhi amid ongoing Enforcement Directorate (ED) investigations against him and Congress President Sonia Gandhi in the National Herald money laundering case.

Gandhi sidestepped any reference to the ED and attacked the government.

“What we are witnessing is the death of democracy. What India built brick by brick starting almost a century ago is basically being destroyed in front of you. Anyone who stands against this idea of dictatorship is viciously attacked and put in jail. The sole idea is that people’s issues should not be raised,” said Gandhi.

He alleged that this dictatorship “is being run for the interest of two big businessmen by two people.”

Rajasthan CM Ashok Gehlot appealed to everyone to come forward to question the government.

Gandhi said the opposition fights in a democracy based on the strength of democracy.

“All institutions are supporting the government fully. Every institution in India is under the control of the RSS. Institutions are not independent. We are not fighting the party. Today, we are fighting the entire infrastructure which is with one party. Financially, BJP RSS has monopoly, institutional monopoly. That’s why the opposition is agitating but that agitation is not coming out so effectively,” said the former Congress president.

Gandhi added that the reality is of high prices, but a different perception is being created.

Where are the startups in India? Gandhi asked.

He said startups are sacking people.

Gandhi said the more “I tell the truth, the more I will be attacked. My problem is I speak the truth and don’t get scared. I will do my job of raising the fundamental issues. I will keep doing my work.”

Gandhi said those who threaten, they fear. “They are afraid of the power of the people. They fear because they lie 24 hours, no inflation, no unemployment, no Chinese incursions,” added the Congress leader.

He said attacks on him will escalate as he raises issues of the people.

“I like it. I get great joy when my political opponents attack me because I understand the strength of my own ideology, my battlefield and why the battle is being fought,” said Gandhi.

Meanwhile, the Congress leaders began their march to the PM house against inflation. The party MPs would later march to the Rashtrapati Bhavan.

"Why do they attack the Gandhi family? Because we fight for democracy and harmony and we have been fighting for years. My family members have sacrificed their lives. When India is divided on Hindu-Muslim lines, we are hurt. When someone is attacked as a Dalit, we are hurt. Ours is not just a family, ours is an ideology.

"Hitler also used to win elections. He had the entire institutional structure with him. Give me the power on the institutions and I will show you how elections are won."