No demolition of slums along Delhi tracks, for now, Supreme Court told 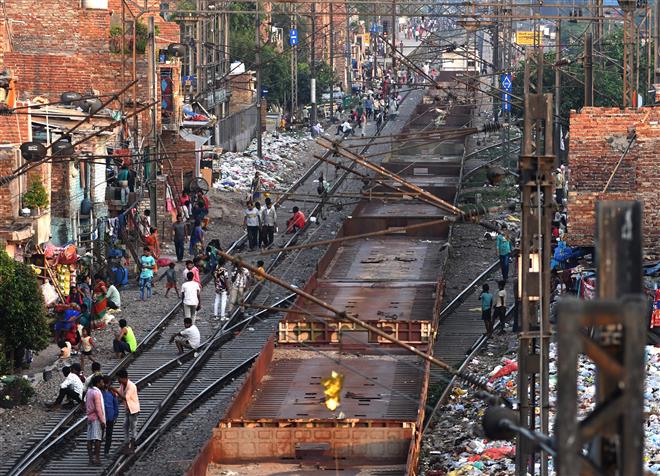 No slum-dwellers along the 140-km railway tracks in Delhi would be removed until a final decision was taken by the government in consultation with the Railways, the Delhi Government and the Urban Development Ministry, the Centre told the Supreme Court.

Solicitor General Tushar Mehta assured a three-judge Bench, headed by Chief Justice of India SA Bobde, that there would be no immediate coercive action for removal of 48,000 jhuggis for the next four weeks.

The apex court on August 31 had directed the removal

of around 48,000 slum dwellings along the railway tracks in Delhi within three months. It said there shall not be any kind of political interference in execution of the plan. The apex court, which posted the matter for hearing after four weeks, was hearing the applications, including the one filed by Congress leader Ajay Maken, who has sought rehabilitation of slum dwellers.

After recording Mehta’s assurance, the Bench posted the matter for further hearing after four weeks.

The court is seized of several applications, including the one by Delhi Congress leader Ajay Maken, seeking rehabilitation of the affected slum-dwellers before they were dislodged.

A Bench, headed by Justice Arun Mishra (since retired), had on August 31 ordered the removal of around 48,000 jhuggis along the railway tracks in Delhi in a phased manner in three months, saying there should not be any kind of political interference in the implementation of its order.

Restraining courts from granting any kind of stay with respect to removal of these encroachments along the railway tracks, the top court had said 70 per cent of the requisite amount should be borne by the Railways and 30 per cent by the state government, and the manpower be provided by the South Delhi Municipal Corporation (SDMC), the Railways and agencies available with the government, free of cost, and they would not charge it from each other.

On behalf of Maken, senior advocate Abhishek Manu Singhvi wanted the Bench to order status quo but the court didn’t oblige him. The petitioners said it would be risky to demolish the hutments of more than 2,50,000 people during the Covid-19 pandemic without prior rehabilitation.