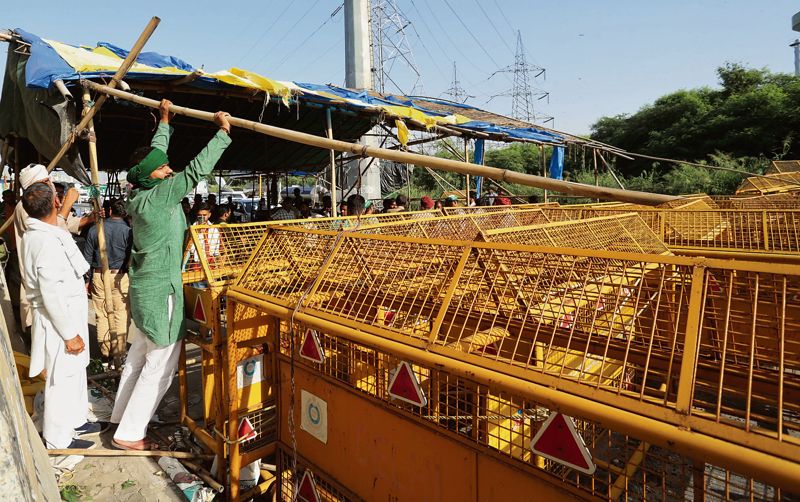 The Supreme Court on Thursday gave three weeks to farmers’ bodies to respond to a petition seeking directions to the authorities to end blockades of roads connecting the NCR to the Capital by farmers protesting against agricultural laws.

A Bench led by Justice Sanjay Kishan Kaul — which had on September 30 wondered how highways could be blocked perpetually — posted the matter for further hearing on December 7.

“I am not averse to their right to protest even when a legal challenge is pending. But roads can’t be blocked…. Ultimately some solution has to be found,” Justice Kaul noted.

“Farmers have the right to protest but they cannot keep roads blocked indefinitely. You may have a right to agitate in any manner but roads should not be blocked like this. People have the right to go on roads,” the Bench, also comprising Justice MM Sundresh, said. Maintaining that “democracy and dissent go hand in hand”, the Supreme Court had on October 7 last year ruled that roads and public spaces couldn’t be blocked indefinitely and demonstrations expressing dissent had to be in designated places alone.

On Thursday, it clarified it was not concerned with any of the larger issues and that the only thing it was looking into was that in view of its earlier orders, roads should not be continuously occupied.

On behalf of some of the farmers’ bodies, senior advocate Dushyant Dave said the blockades had been caused due to the manner in which police arranged security. He alleged that prevention of their passage to Ramlila Maidan was causing the blockage at the site. Dave demanded that the matter should be sent to a three-judge Bench as the earlier case on the issue had been dealt with by a three-judge Bench.

The Bench said after the parties filed their replies, it would decide whether to pass orders or club it with other matters pending before a different Bench.

It was hearing a petition filed by Monicca Agarwal — a women resident of Noida – on the issue. Agarwal — a single parent with some medical issues — alleged that due to blockade of roads by the agitating farmers travelling between Noida and Delhi was taking two hours instead of the usual 20 minutes.

Another Bench led by Justice AM Khanwilkar is dealing with Kisan Mahapanchayat’s plea seeking directions to the Centre, Delhi Lt Governor and Delhi Police Commissioner to allow it to stage ‘satyagraha’ at Jantar Mantar in the Capital.

“You have strangulated the entire city, now you want to come inside the city and start protesting again here… The residents around… are they happy with the protest? This business should stop…. There has to be a balanced approach,” Justice Khanwilkar had told the counsel for Kisan Mahapanchayat on October 1.

The Samyukt Kisan Morcha has suspended Yogendra Yadav for a month after he visited kin of BJP worker Shubham Mishra, who died in Kheri violence. Yadav said: “Grief cannot be partisan. I have no regret, though I should have consulted my colleagues before meeting Shubham’s family.” TNS