‘Not your party member’: Mamata hits back at Modi over 'another seat' jibe 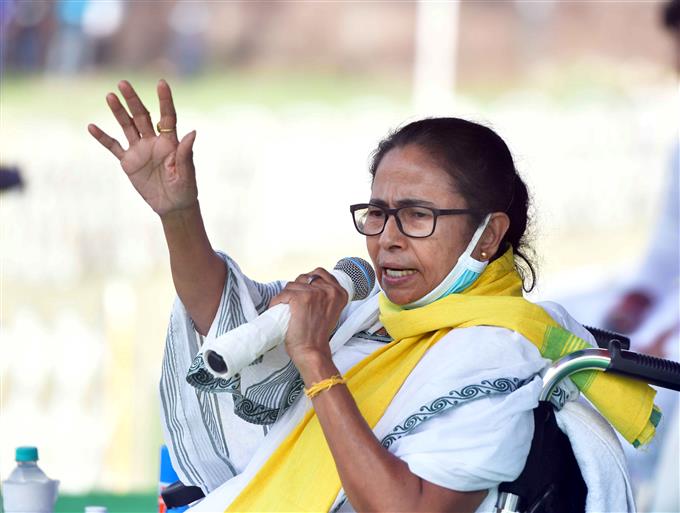 Asserting that she was winning the election from Nandigram, Chief Minister Mamata Banerjee on Friday hit back at Prime Minister Narendra Modi and said that she does not need his “suggestion” on contesting from an alternate seat.

The prime minister had on Thursday asked Banerjee to clarify whether there is truth in “rumours” that she would file her nomination for another seat going to the polls in the last phase, maintaining that the TMC chief has admitted defeat in Nandigram.

“I want to tell the prime minister to control his home minister first and then try to control us. We are not your party members that you can control,” Banerjee said at an election rally in Dinhata in the north Bengal district of Coochbehar.

Banerjee had on Friday alleged that Shah was influencing central forces to behave in a partisan manner during the Bengal polls.

“I am not your party member that you will suggest I contest from another seat. I have contested from Nandigram and will win from there,” she added.

At a rally in Uluberia on Thursday, Modi said that the people of Bengal are prepared if she goes anywhere else to contest, anticipating defeat in Nandigram, where she was up against BJP’s Suvendu Adhikari, her former close aide.

Banerjee, who began her north Bengal tour with the rally here, alleged that the election is not being conducted by the Election Commission but by Amit Shah, the Home Minister.

She also alleged that the central forces were being used to intimidate the voters.

“I want more than 200 seats, since anything less than that will mean they (BJP) will buy the ‘gaddars’ (traitors),” Banerjee said, apparently admitting that TMC MLAs may be up for grabs if her party wins by a slender margin in the elections to the 294-member assembly.

Banerjee said she required “strong people”, including women, to be polling agents for her party in the elections who would not give in to any intimidation or allurement.

The TMC chief had for some time been voicing concerns that her rivals may buy up poll booth agents, critical to the election process as these party officials help check electoral malpractices and fake voting.

Speaking at Natabari, also in Coochbehar, the chief minister said leaders from Tamil Nadu, where assembly elections will be held next week, had contacted her over income tax raids on relatives of DMK leader M K Stalin, claiming that these were done at the behest of Amit Shah.

She alleged raids by central investigative agencies in Bengal were for similar political considerations.

The TMC supremo while speaking at Falakata in Alipurduar, claimed the names of 14 lakh Bengali speaking citizens residing in Assam were deleted in NPR, and maintained the BJP had similar plans for Bengal also. — PTI