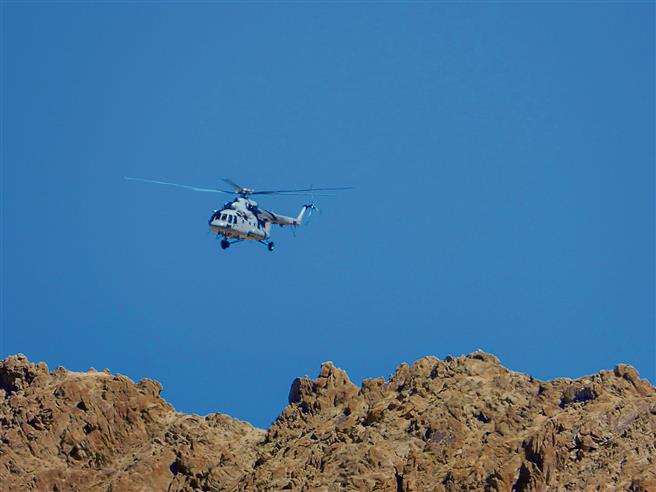 Amid rising LAC tensions, an IAF helicopter flies over Leh on Tuesday. PTI

The Indian Army occupied a critical mountain pass, Renchin La (called Reqin by China) located close to Spanggur Gap, east of Chushul, along the Line of Actual Control (LAC), in Ladakh on the night intervening August 30 and August 31.

Indian occupation of the pass, which is located in the “grey zone” along the LAC, has led to a sharp reaction from China. “Grey zone” is the areas where perceptions of the LAC vary with both sides making counter-claims.

Two Brigadier-level meetings (on August 31 and September 1) at Chushul ended in a stalemate, sources said.

The Renchin La is one of the 13 identified possible routes of military ingress into Ladakh from the Chinese side. These routes are natural gaps in mountains along the 826-km LAC in Ladakh.

The pass accords India a clear view of Spanggur Gap, Moldo Garrison of China, besides the southern bank of the Spanggur Tso. The move, a clear counter to the PLA, expands the ongoing stalemate south of Pangong Tso.

So far, everything was happening north of the lake.

The PLA reportedly moved its tanks from its base at Moldo and could have occupied any area of “grey zone” like they did at Finger-4 on the north bank of Pangong Tso.

Indian surveillance systems picked up the PLA movement and the concentration of troops and tanks at Moldo necessitated a move to occupy heights.

These positions dominate the Chushul-Tsaka la-Dungti road on the Indian side and overlook the Rezang La, where the two countries fought a pitched battle in 1962.

The Renchin La had not been occupied by either side. Indian Army sources said Indian troops were firmly “within our perception of the LAC” and it was wrong for China to claim that our troops had intruded across.

At the military meetings, it was conveyed that India had no intention of changing the LAC status, as was being attempted by the PLA.