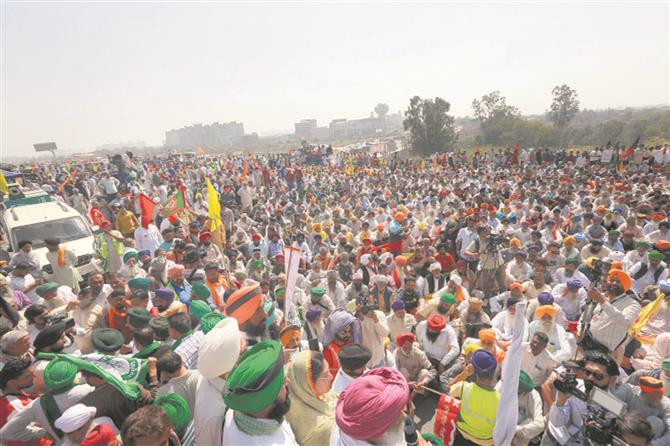 Farmers block a highway on Haryana-Delhi border to mark 100 days of their agitation on Saturday. PTI

Even as the farmers today blocked the Kundli-Manesar-Palwal Expressway to mark the 100 days of their protest, BKU leader Rakesh Tikait warned the government of intensifying the stir, saying “this was just a trailer”.

Patiala: In a faux pas, the Delhi Police issued summons to a farmer who died on December 31 last year, asking him to join the investigation in the Republic Day violence. Besides, his two brothers (both above 80) were also summoned.

Reiterating the demand for repeal of the three farm laws, Tikait said: “Like Delhi border, the e-way can also be blocked completely. Today was a trial for five hours.”

The farmers blocked the expressway at four points — Mandothi (Jhajjar), Kundli (Sonepat), Farukhnagar (Gurugram) and Palwal. The blockade began at 11 am and continued till 4 pm. No untoward incident was reported.

New Delhi: As the farmers’ protest against the new agriculture laws completed 100 days on Saturday, the Congress said the period was a “black chapter” in India’s democracy for the treatment meted out to protesters and also marked 100 days of the BJP’s ‘arrogance’.

Farmers holding black flags and wearing black armbands and some women protesters with black dupattas shouted slogans against the BJP-led government for not acceding to their demands. Farmers camping at Tikri reached Mandothi in tractors where residents of nearby villages joined them. Union leader Balbir Rajewal said: “We will not step back till the government repeals the laws.” In Palwal, barring police transport and ambulances, no vehicle was not allowed on the expressway between 12 pm and 4 pm. Former MLAs Karan Dalal, Uday Bhan and Raghubir Tewatia joined the stir.

In Gurugram, the expressway was blocked at Badli toll plaza in Farukhnagar. — TNS