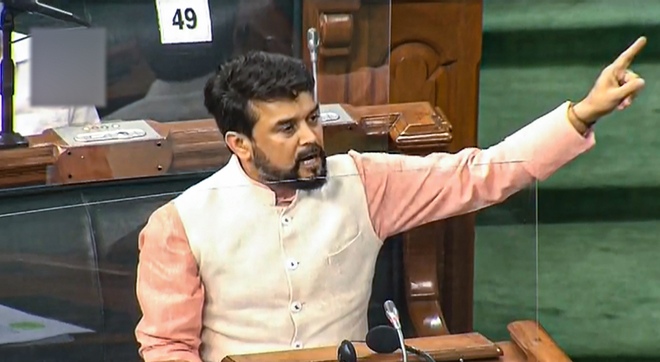 Minister of State for Finance Anurag Thakur speaks in the Lok Sabha during the monsoon session in New Delhi on Friday. PTI

The Opposition and the ruling BJP clashed in the Lok Sabha on Friday over setting up of PM Cares Fund, leading to Minister of State for Finance Anurag Thakur expressing “regret” over his remarks on former PM Jawaharlal Nehru. The House was adjourned four times between 4 pm and 6 pm.

Replying to queries by the Opposition on the need to create PM Cares Fund, Thakur said the earlier Prime Minister’s National Relief Fund was created by “Nehru ji like a royal order”.

“From 1948 till today, it has not been registered. How did it get the FCRA (foreign contribution) clearance?” he said.

Alleging misuse of funds, he said, “You created a trust for the Gandhi family. Nehru and Sonia Gandhi were its members.

This should be investigated.”

This led to pandemonium in the House with Congress leader in the Lok Sabha Adhir Ranjan Chaudhary hitting back: “Have we said (PM Narendra) Modi is stealing from funds? How could he (Anurag) use such words for Nehru.” Congress MP Gaurav Gogoi demanded an apology from Thakur. At 6 pm, the House resumed normal business after Thakur said, “I did not want to hurt anyone…. I regret my words.”

Interest on interest for loans up to Rs 2 cr waived

Govt to reimburse lenders after refund to borrowers