Our sons, daughters still stranded in Ukraine will be brought back: PM Modi in UP : The Tribune India

Our sons, daughters still stranded in Ukraine will be brought back: PM Modi in UP 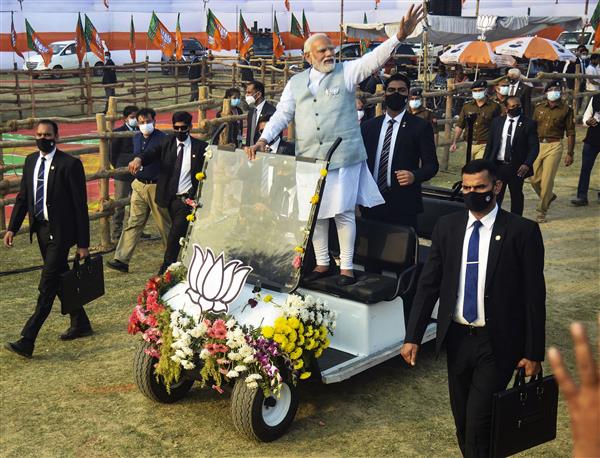 Prime Minister Narendra Modi waves towards supporters as he arrives at the 'Booth Vijay Sammelan' for the ongoing Uttar Pradesh Assembly elections, in Varanasi, on Sunday, February 27, 2022. PTI

Asserting that India has always given priority to the lives of its citizens in difficult times, Prime Minister Narendra Modi on Sunday said the government is working tirelessly to bring back all Indians stuck in Ukraine.

Addressing poll events at three places in Uttar Pradesh while voters decided the fate of 692 candidates in 61 Assembly constituencies in Phase 5, the Prime Minister also cautioned saying that “people who have been involved in arms deals cannot strengthen the country”.

“Uttar Pradesh elections are a fight between the dynasts and diehard nationalists, which the opposition parties do not understand,” he said.

“Dynasts who support terrorism cannot strength the country”, he said, adding that “in these tough times it is essential to make the country strong”.

“By running Operation Ganga, we are bringing back thousands of Indians home. Our sons, daughters still stranded in Ukraine will be brought back.

“The government is working day and night for them...Wherever there is trouble, we left no stone unturned to bring our citizens back,” he said.

In Basti, PM Modi also slammed the opposition parties as ‘parivarwadis’ who “let our armies dependent on other countries, destroyed India’s Defence (sector)”.

“Previous governments focused on foreign products for their cut and commission. They made our armies dependent on foreign companies and destroyed the defence industry. But we are now making a defence corridor in Uttar Pradesh,” he said.

In Varanasi, he said: “We have seen how much people have stooped low in Indian politics but when in Kashi prayers for my death were done, I felt elated. This meant that till my death neither I will leave Kashi nor its people will leave me” and exhorted party workers to ensure that the poor get the benefits of the government’s welfare schemes.

He also took a swipe at the opposition claiming that for them parties were “private properties” while the BJP is a party of its workers.

In an apparent dig at the Samajwadi Party, the PM Modi said “those who cannot stay with their friends can never stand with the people of the state”.

The SP had an alliance with the Congress in the 2017 Assembly polls and the BSP in the 2019 Lok Sabha elections.