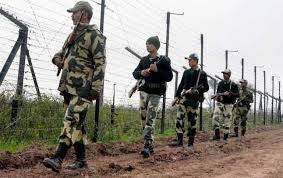 Cracking the whip on overweight personnel, the Border Security Force (BSF) has directed that all personnel who do not meet the laid down physical and medical standards be posted out to “hard” areas.

Hard areas are field stations or outposts where the climate and terrain are harsh and the operational is tough such as border areas or in a counter-insurgency environment. Families are not generally permitted to reside in hard areas.

“As desired by Director General (DG), BSF, all personnel weighing more than 105 kgs be posted out to hard areas and relieved immediately,” orders issued by the DG’s secretariat to the Personnel Directorate at Force Headquarters in New Delhi, on July 10, stated.

A list of such “overweight” personnel along with remarks of the DG has also been sent to the Personnel Directorate. Being overweight or obese is a manifestation of diet and lifestyle, though in some cases it may be genetically induced.

Raised in 1965 with 25 battalions, the BSF has emerged as the largest border guarding force in the world with 186 battalions, including three disaster management battalions. It is responsible for the peacetime management of the 4096.70-km border with Bangladesh and 2289.66- km border with Pakistan. The BSF is also deployed along a 237.2-km stretch of the Line of Control from Akhnoor to Kargil in Jammu and Kashmir under the operational control of the Army.

Like with all uniformed forces, physical standards and health issues are a major concern with the BSF. Given its operation role and nature of duties, high levels of fitness and training are required across the force’s hierarchy. In addition to physical fitness, stress among the rank and file is also an issue, for which various mitigating measures have been implemented.

Publicly available statistics by the Ministry of Home Affairs reveal that the leading cause of death among the personnel from the Central Armed Police Forces (CAPFs), or paramilitary forces as they were known earlier, is not combat, but ill-health including cardiac disorders that are obesity-related.

Recently, the BSF introduced a three-week physical fitness course for officers of the rank of Commandant and Deputy Inspector General at the BSF Academy at Tekanpur. Earlier, some BSF officers were also sent to the ITBP Academy in Mussoorie for such training capsules.

About two years ago, the CAPFs had made it compulsory for all security personnel to undergo an annual mental health test to determine their well-being and where required, bring in corrective measures based on their assessment scores.